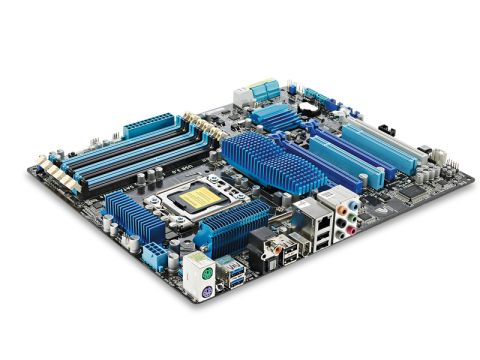 The 16+2 phase design of this mobo separates it from the competition, giving you more overclocking headroom

Getting the most out of your Bloomfield i7 used to mean spending some seriously silly money on a quality X58 motherboard. Indeed Asus' Rampage III Extreme (R3E) Republic of Gamer's board is the perfect embodiment of that. An incredibly feature-rich board, with bags of overclocking potential, it's beyond the realms of most of us mere mortals at £325.

Which is where this vanilla Asus X58 board, the snappily named P6X58D-E comes in. It's the mid-range refresh of the company's X58 lineup with the all-singing, all-dancing poster children of the latest generation of motherboards; USB 3.0 and SATA 6 Gbps connections.

It totally undercuts even its own X58 boards, with Gigabyte's X58A-UD3R firmly in its sights.

At £170, it's one of the cheaper 1366 sockets boards around, but offers surprisingly good performance. At stock settings with the six-core i7 980X, it actually turbos higher than the superlative R3E. Okay, only by 0.01Ghz, but it's still keeping pace.

And it keeps pace as you ramp up the clockspeeds, too. When we hit the 4.25GHz brick wall, which our basic overclocking dropped in the way, the P6X58D-E was easily throwing up comparable scores to the far more expensive board. It was even giving us the same Cinebench timings as the R3E running at 4.37GHz.

That extra overclocking prowess is what you pay the premium for when buying the R.O.G boards. But then the gaming performance of these premium Asus boards also helps to justify that extra cost.

Phase for the win

At the same CPU speed ratings, the R3E board shows a clear frame rate advantage over the P6X58D-E in terms of gaming performance. Realistically though, the slightly higher frame rates and the extra few hundred MHz you can squeeze out of the pricier board aren't going to set your gaming world alight once you factor in a serious card.

But then the same could be said of the cheaper-still Gigabyte UD3R board. That's still got the USB 3/SATA 6Gbps combo, has middling overclocking performance and supports all the CPU and GPU pairings this board covers.

The key to the P6X58DE's dominance, though lies in that 16+2 power phase design, delivering more overclocking headroom than the Gigabyte board's 8 phase design.

What we've got here, then, is a powerful X58 board that happily keeps pace with the far more high-end socket 1366 mobos for much longer than the competition. It also manages to do that at a low price-point.

It was always going to be a tough ask to best the bargainous UD3R without making big compromises in quality, but the P6X58D-E has managed to do so with room to spare.