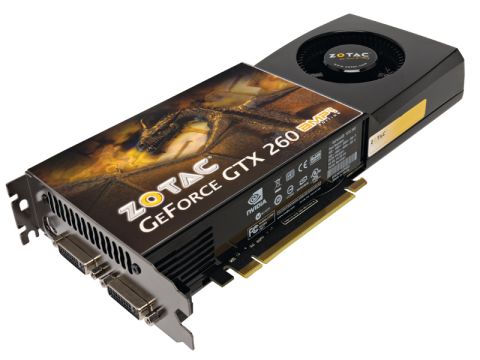 Times are tough in the graphics sphere.

If you want to buy a new graphics card these days, there are more ﬂavours of pixel pusher to choose from than there are of over-priced ice cream – and with equally confusing names.

Here we have the Zotac GTX 260 AMP2! – the graphical equivalent of a big tub of Rocky Road…

The original GTX 260 was an excellent single-GPU card that just about held off AMD's 4870
in performance terms, if not in price.

However, with the release of the red corner's GTX 280-beater, 4870x2, prices tumbled across the board, dropping the standard GTX 260 below the £200 barrier.

Then along came the inevitable rounds of overclocked cards, which raised the price level yet again. In Zotac's case these became the AMP! cards, but that wasn't enough for NVIDIA, which has now upped the stream processor count on the GTX 260 from 192 to 216.

So what difference does that make to the actual performance of NVIDIA's midrange beastie?

The short answer, we're sorry to say, is not much. We benched Zotac's new 216 core GTX 260 against its original 192-core card and found very little difference that couldn't be explained away by the simple fact that it's factory-overclocked across the board.

In performance terms, the number of stream processors isn't a particularly great indication of gaming speed. The fastest AMD chips have 800 stream processors on them in the shape of the RV770 (doubled to 1,600 with the twin-GPU R700), but that doesn't mean you're going to see a four-fold improvement in performance compared to NVIDIA cards with around 200.

This could be explained away by the different processes used by each of the different companies, but even within NVIDIA itself, the impact of upping the core count is questionable. The G92-based 8800GT uber-card had twice as many stream processors as the G94-based 9600GT, yet the core-light card could easily hold its own against its otherwise almost identical older brother.

So what's going on here then? The more cynical among us could dismiss it as a simple ploy to squeeze as much money as possible out of the graphics card-buying public by throwing in a few more cores to justify keeping the price higher than that of the standard models.

As we said at the start, times are hard and loyal manufacturers need to make their margins – especially at this time of year.

Realistically, the extra performance you're getting here compared to the regular GTX 260 is all down to the overclocking alone, so save yourself £45 and stick with the humble 192-core card instead.