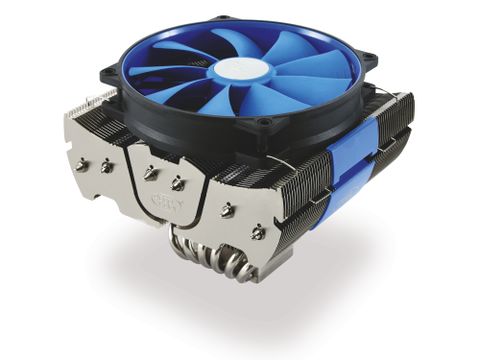 A cooler the size of a helicopter...

Despite the enormity of the cooler, the Fiend Shark is surprisingly easy to install and the clear instructions help with this.

Unusually instead of the usual tiny screws to fix the mounting brackets to the heatsink there are just two hefty thumbscrews, one each side to do the job.

It can though prove a little tricky to get started if you aren't blessed with thin fingers...

In the marketing spiel for the Fiend Shark you might notice it claims to be able to cool the surrounding motherboard components down. But don't be overly sucked in by all this, as all top flow chillers cool surrounding areas to a certain extent.

Because of its sheer height of the device (131mm), and its 140mm cooling fan, it is a little more effective and noticeable than most. Or to put it another way, if you put your hand under the cooling fin array you can certainly feel the draught, but only when the fan is being seriously pushed.

Under normal conditions the slightly tweaked UBF140 fan is pretty dammed quiet, with a quoted noise level of just 18.2dBA 700rpm, which rises to a much more audible 32dBA at 1400rpm when it is shifting an impressive 80cm3 of airflow.

When it comes to performance though the Fiend Shark, despite its size and comparatively huge 140mm fan, is a bit disappointing.

This is especially true when it's compared to the tower coolers we've recently reviewed. But then most top fan coolers do seem to lack a little when compared to their tower brethren.

Adding to the problem with the Fiend Shark is the price tag, which makes you feel that it really should be performing better than it does.

The Fiend Shark certainly looks the part and its installation should be a lesson to all those cooler manufacturers who seem to revel in making fitting a CPU cooler to a motherboard as complicated and as tortuous as possible.

It's also tall enough to allow the fitting of some fairly hefty heatsink equipped memory modules into the DIMM slots.

It has to be said that given its size we were hoping for more from the Fiend Shark, yes it's quiet at stock speeds but then if you want a quiet cooler there are plenty around for a lot less money.

Given its size it looks like a cooler aimed at overclockers, but given our test results if you are looking for air cooling for some pretty extreme overclocking your probably better off looking elsewhere.

Looks impressive but unfortunately suffers, like most top-coolers do, in comparison with their tower cooling competitor's.