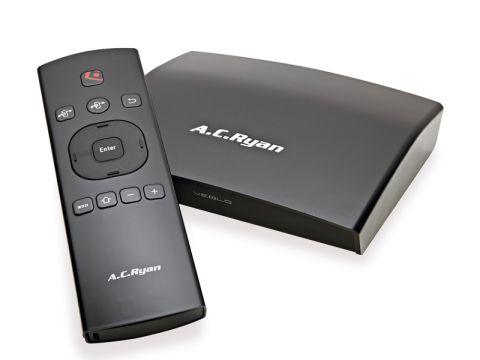 We expected much more from ACRyan than this. It may be updated later, but avoid right now

There's no doubt in my mind that the ACRyan VEOLO seemed like a good idea at the time. I could probably stop the review right there and you could extrapolate my feelings on ACRyan's Android-based media streamer from that one sentence, but I'm going to soldier on because I just have to get off my chest just how bad a device this really is.

Like I said, the core concept isn't necessarily a bad one. ACRyan has been making increasingly brilliant network media streamers for the last few years. They've been getting more powerful, with more functionality and, despite the limitations of the Realtek chipset, the GUI has come on leaps and bounds.

So when I heard ACRyan was using the Android OS to run its latest streamer, thoughts of an individually tailored interface, full web capabilities and the added bonus of a raft of apps and widget happily came to mind. Smart TVs all round then.

When I opened the box, I was still excited. It's a sleek, stylish bit of kit, perfect for sitting smartly, though unobtrusively, by your HDTV.

And then I realised it was running Android 2.2. Yeah, the rubbish version of the operating system that was rubbish on the early Android smartphones and was the darling of the rubbish cheapo Android tablets that almost killed the platform dead.

The first line of the VEOLO feature list gave me hope: 'Internet TV web browser, with HTML5, Adobe Flash and Chrome V8 JavaScript support.' But despite this, Flash definitely does not work – unless your definition of 'working' means playing iPlayer content for 15 seconds before crashing the browser.

None of the online video providers worked with either the stock browser or the generally Flash-happy Dolphin HD, and only the most basic of website animations actually functioned. Even ACRyan's own site doesn't work particularly well, covering up some menu options with its jerky scrolling images.

It's a shame – there are some decent points of interest in the VEOLO, but the OS completely hobbles it in terms of web content. The video playback is excellent; it happily zipped through different 1080p MKV files straight from a network hub. There was no issue skipping through movies or with different subtitle formats.

The controller is almost a winner too, riffing on the simplicity of the Boxee Box's dual-sided remote. It's got Wii-like functionality too, allowing you to wave it around to control the on-screen cursor. Unfortunately it's not particularly well made, with sharp edges and awkwardly-placed buttons. But that's as good as it gets.

We were hoping for a device to marry web TV with ACRyan's strong offerings in the network media player department. It could have been the death knell for the media PC. Sadly though, this device manages to make for an incredibly unpleasant user experience. Avoid like a low-rent Android tablet.