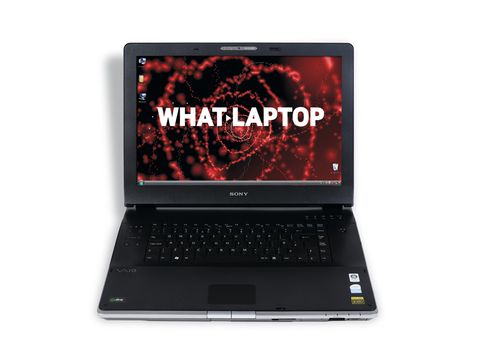 The Sony VAIO VGN-AR71J is a solid and well-built machine, but the base design is starting to show its age

Tough, but ultimately this laptop needs a redesign

The Sony AR Series has been in existence for two years, but has been constantly evolving to include the latest features for the entry-level desktop replacement market.

The latest iteration is the Sony VAIO VGN-AR71J (£599 inc. VAT), which is a hulking 3.9kg laptop dominated by its 17-inch Super-TFT screen.

A sticker on the case proclaims Full HD (high deﬁnition), but sadly, this does not mean the screen will natively support this standard as the screen only has a resolution of 1440 x 900 pixels. Instead, it means there is a HDMI port that allows you to stream Full HD content from the laptop to a suitably enabled HD television.

The screen delivers sharp and bright images and the use of the nVidia GeForce 8400M GS GPU makes this a machine that can be used for playing games at a decent frame rate. That said, this is a mainstream adapter so won't be able to run high-end games.

This laptop proved disappointing when it came to performance.

Using an Intel Pentium Dual-Core processor, as this name suggests, it has two processing cores but is still a fairly basic chip, so should only be used for entry-level tasks.

The addition of 3072MB of memory means that Windows Vista Home Premium loads and runs smoothly and the 200GB hard drive is big enough to store all your media ﬁles with ease.

The chassis is made of thick and sturdy plastics ﬁnished in matt black. Along with the black keyboard, this machine looks rather subtle and subdued. The build quality is great and the large screen is held ﬁrmly in place by two solid hinges.

The keyboard lacks a dedicated numeric keypad, with the standard-sized keyboard positioned in the centre of the body. The keyboard is incredibly comfortable to use, but sadly in the vast expanse of plastic that surrounds it, it simply feels lost.

The tiny touchpad, which is the same colour as the main chassis and easy to miss, also seems lost, but it is the mouse buttons that suffer the most. Small and perched on the edge of the chassis, not only are they awkwardly placed, but the size of them makes them ﬁddly to use.

Media buttons to the left-hand side of the keyboard allow you to control volume and media settings, while two quick-launch buttons allow you to set up your favourite tasks to instantly launch.

The Sony VAIO VGN-AR71J is a solid and well-built machine, but the base design is starting to show its age.