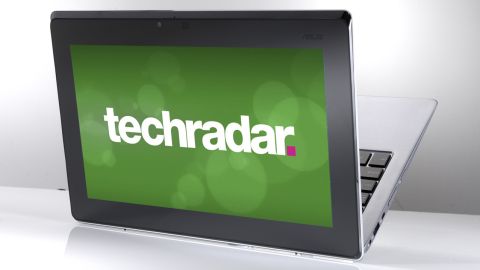 For all the eye catching design and dual-screen versatility, the Asus Taichi also has some impressive components pulling the strings. The model we had in for review came sporting the Intel Core i7-3517U processor and 4GB RAM.

There's also a Core i5 spec available for both the 11.6-inch and the larger 13.3-inch models, but we'd opt for the i7. Clocked at 1.90 GHz, the Asus Taichi navigated Windows 8 smoothly, and we found apps and programs loaded quickly.

Intense multitasking failed to slow down the experience, and the only evidence of lag we found was while operating the two screens simultaneously. If one screen was browsing while another was running a program, there was a bit of slowdown as the Asus Taichi tried to keep up.

The 256GB SSD also helps maintain speed, thanks to the lack of moving parts. But these days, 256GB really isn't all that much. Those of you with large media collections will want to supplement the Asus Taichi with an external hard drive or cloud storage.

The lack of a dedicated GPU limits gaming potential, and the Asus Taichi relies on Intel's own HD Graphics 4000 integrated card for its graphical muscle. Ultra-portable laptops have never really been designed for gaming, and this is no exception - you won't be able to fire up Call of Duty: Black Ops 2 on the Asus Taichi.

But to be fair, older and less-demanding games shouldn't be a problem. Given that people regularly use their tablets for gaming, it should be a big consideration and the Asus Taichi certainly copes with casual games such as Angry Birds and Cut the Rope - both of which are available to download from the Windows Store.

The dual screens on the Asus Taichi both feature Full HD 1920 x 1080 resolution displays. The main notebook screen is a matt display that blocks out irritating reflections and is useful for working on documents.

The second screen on the lid features a glossy thin-film transistor coating that gives extra depth to colours and shades. It's particularly noticeable in blacks and reds, and is more geared towards the multimedia consumption we want from a tablet.

When it comes to the specifications, Asus hasn't compromised on the Taichi, and that's part of what gives it the astronomical price tag.

This was exactly the right approach though. Given what the Asus Taichi is trying to accomplish by filling two separate form factors, the components needed to be top class.

However, a bit of extra RAM wouldn't have gone amiss, and we'd encourage you to opt for the Core i7 model over the Core i5 version.