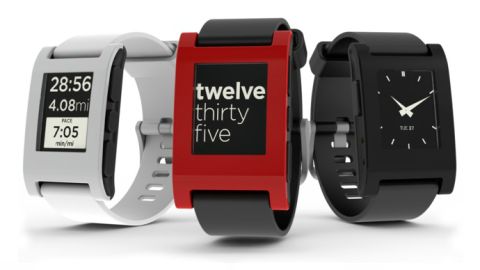 A strong start - can it keep it up?

When we're all rocking smartwatches in ten years time, will we thank the Pebble? Some people will say so. Some people argue it's not even a smartwatch yet.

But whatever chord the Pebble strikes with you, there's no denying that the watch has gained an impressive amount of admiration, completely smashing past its initial Kickstarter funding goal and reigniting interest in an area of tech that was seemingly dead and buried.

It's a fact that seems almost ludicrous for something so understated - but the simplicity is half of what makes the Pebble so appealing. A Galaxy Gear-style kitchen sink watch, this is not.

The other half of Pebble's success lies in its customisation and openness. From watch faces to apps, you can completely tailor the Pebble to you, and for the resonable price of $150 (about £92, AU$166). It's the Linux of smartwatches, if you will.

The design of the Pebble might be its biggest area of contestation. Sure, it's a lot more understated in its looks than many of its rivals and could easily be mistaken for nothing more than a basic time teller, but it's likely to prove to be a tad too big for those with smaller wrists.

I wouldn't call the Pebble bulky but it's on the border of being so, and certainly has a tendency to snag if you're putting on anything with narrow sleeves.

The fact it doesn't come in different sizes means that there's no convenient way to get around these problems. But for most people, the watch will fit comfortably enough, even if it's not as snug as it could be. The Sony Smartwatch 2 is still nicer.

The Pebble comes in white, black, grey, red or orange. Beyond the face, the ticker also comes with a 22mm plastic watch strap which is nice and comfortable, but you can switch that out for a strap of your own choosing if you so wish.

The Pebble might be a very passive device but it does require some level of interaction. And how do we interact with it? Buttons! You remember those, right?

On the left of the watch face is one big home button, while three others can be found on the right side - up, down and select. Below the button on the left you also have three contact points for connecting the magnetic charger that comes bundled in the box. And yes, that is the only way to charge it, annoyingly.

The good news is that the Pebble has an impressively long battery life. I found I could expect to get between five and seven days of moderate use without the need for a charge.

The Pebble feels robust, although build quality of the buttons doesn't feel particularly amazing. In fact, using buttons (especially ones this big) just feels a bit odd in these modern times. But they're enough to meet the simple demands of the watch in its current form.

Which brings things to the display. When you look at what else is out there, the Pebble's e-paper display (no, not e-ink, this is a low-power monochrome LCD) looks a bit primitive but, once again, fits with the watch's simplicity.

Chances are we'll see the Pebble introduce a colour display somewhere down the line but the black and white screen makes the watch easy to read in a variety of lighting conditions - although direct sun glare does tend to reflect quite harshly.

There's also a backlight that's activated when you press a button on the Pebble or - thanks to the inbuilt accelerometer - jerk your wrist quickly.

Plus, the Pebble is waterproof to 5 atmospheres, which means you can even take it for a swim in fresh or salt water and it'll be absolutely fine. Just don't go below 160 feet.

Next Page Features and apps