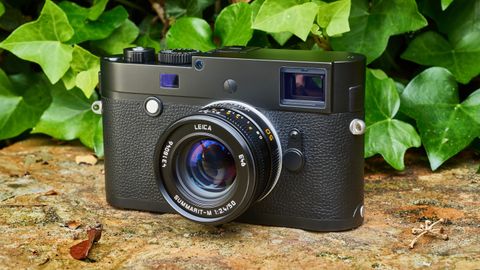 The Leica M Monochrom (Typ 246) is specialized and expensive, and its manual rangefinder focusing won't suit everyone. But the quality of the results justifies Leica's brave decision to use a monochrome sensor.

Making a digital camera that shoots only in black and white might seem like a stroke of madness to most people, but German prestige camera brand Leica seems to think it is such a good idea it has introduced an updated version of its existing Monochrom rangefinder.

The new model is called the M Monochrom (Type 246) and brings with it a collection of dramatic improvements over the first model. Since that original Monochrom was launched in 2012, Leica has made some significant changes to its M series of digital rangefinders, including improved sensors, better screens and a slightly redesigned body, and this new Monochrom (Type 246) gets all of those developments and more.

The most easily digested upgrade here is the move from an 18-million-pixel CCD sensor to a 24-million-pixel CMOS unit. Not only does this give us more resolution, but the use of CMOS technology means the Monochrom (Type 246) gets live view display and the ability to shoot 24fps Full HD video too. The camera's rear screen is new as well – the 3-inch 921,600-dot LCD covered with a protective sheet of super-hard and scratch-resistant sapphire glass is a great improvement over the previous 2.5in 230,000-dot model.

Other new features on the Typ 246 include a faster processor that can push DNG raw files and JPEGs to the memory card a lot quicker than before, as well as being able to display captured images with less delay.

As a camera the shoots only in monochrome the Monochrom has no need for the colored filters that usually cover pixels on digital sensors. Without these filters more light reaches the photodiodes, so the lowest sensitivity setting is ISO 320 – with the range extending to ISO 25,000. As with most other modern Leica M cameras, users have a choice of manual exposure or aperture priority, and focus is, of course, an entirely manual affair.

Shutter speeds run from 60 seconds to 1/4000sec, and the shortest shutter time that can be used with flash is 1/180sec.

In the sense that the Monochrom uses no interpolation, no low pass filter and only shoots in black and white, it is completely alone in the market, and faces no direct competition at all. Almost every digital camera has a black and white mode, and all digital images can be converted to black and white in software, but none will be quite the same as this.