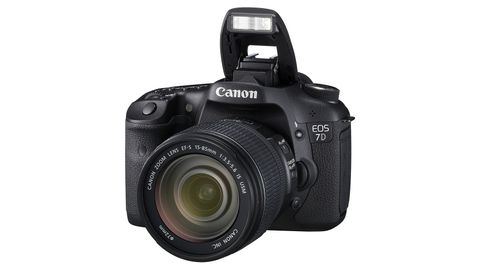 EOS 5D MKII users had to wait for a firmware upgrade before they had manual control over their cameras' video mode; the 7D provides an incredibly powerful manual mode out of the box. Fully automatic modes are still there for those who want to point and shoot, but flick the mode wheel to manual and you can set your own aperture, shutter and ISO speeds.

Quality is unbelievable – sharp, with rich colours that, with the frame frozen, may as well have been still images. Sensor wobble (also known as the 'jello' effect) is less in evidence in our test videos as it is with some other cameras, most recently the Pentax K-x, although we noticed problems with vertical objects when the camera panned quickly.

Trees, for instance would lean towards one side of the frame depending on which way we panned the camera, and while this is a simple enough problem to correct (pan slower), it means the 7D isn't without the odd chink in its armour.

However, there's much more to like than dislike. The manual mode provides a massive amount of flexibility and power, besides being easy to use. Your changes are reflected in real time on the screen and you can change the aperture and shutter speed while video is recording.

Shooting for a day is instructive. You can forget about telephoto work unless you have a reliable stabilised lens and ideally a tripod. You can focus during recording, as long as you're happy to live with relatively slow contrast detection focusing, which is less accurate and takes longer. The 7D's integrated microphone also picks up a fair amount of handling noise, although you get an external microphone socket on the side. A headphone socket is the only obvious missing detail.

We also had huge problems with our 4GB Crucial memory cards. Having never showed signs of slowness before, the very longest video we captured in the 7D's 24p 1080 mode was 50 seconds long, and that was the exception. Our videos averaged between eight and 10 seconds each before the camera ran out of buffer and stopped recording. To call it frustrating is a masterpiece of understatement.

You'll also need plenty of space. The smallest still image the 7D produced was 3.29MB, but the average was a sturdy 7MB. And, with HD video taking around 60MB for a 10 second file, a Compact Flash card with a capacity of 32GB goes from being a luxury to a fairly strict necessity.

A battery grip will come in handy as well – at the end of a day's shooting, in which we captured 8GB of stills and video, the 7D's battery was half-depleted, meaning you'll need to take spares if you're going somewhere with limited access to electrical outlets.

The 7D's battery (part code LP-E6) is the same as the 5D MKII's, and will set you back around £30 for a replacement. An alternative is the BG-E7 battery grip, which takes two batteries or, usefully for those heading for the wilds of Siberia, universally-available AA batteries.