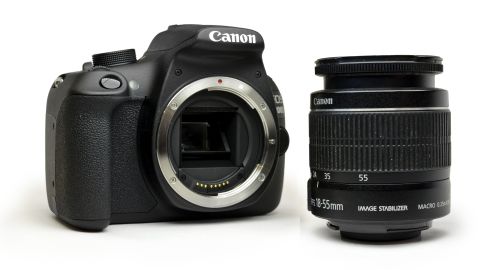 The Canon 1200D is an SLR, so it has an optical viewfinder - and you can use interchangeable lenses.

Despite the low price points, the entry level of the DSLR market is very important for building customer loyalty.

The new Canon EOS 1200D replaces the Canon 1100D and sits just below the ultra-small Canon 100D as the first camera in the line-up.

Rather than a major overhaul of its predecessor, the 1200D is more of a gentle upgrade, which in conjunction with the new app which is being launched for iOS and Android is designed to entice beginner users.

The app gives the user a walkthrough of the camera's key functions, as well as dishing out tips and advice on how to use it. There's also tutorials and inspirational challenges to get new users motivated with different ideas to try out.

Featuring an 18 million-pixel sensor, the camera has a Digic 4 image processor, which although not the most recent Canon imaging engine, has proven itself to be a decent performer in previous Canon models.

Aimed squarely at the entry-level user, it comes packed with several automatic modes, including Scene Recognition Auto and some Creative modes to give images a different look, something which may appeal to mobile phone and compact camera users.

On the back of the camera is a 460k dot resolution, three inch, screen, which is neither touch sensitive, articulating nor tilting. It is joined by an optical viewfinder which offers a 95% field of view.

Full HD video recording capability is included, which means that the whole Canon DSLR line-up now has the capacity to record high resolution movies. You can also take full manual control of video recording, which is nice to see an entry level model.

The 1200D goes up against the very successful Nikon D3XXX range, of which the Nikon D3300 is the latest model. Although both sit in the same position in each other's respective line-ups, the Canon, for now at least, is much cheaper.

Canon has given the 1200D an improved look and feel, bringing it more in line with something like the Canon 700D, which sits ahead of it in the line-up. The deep grip and textured coating give it a feel of quality, but also make it easy to hold, and even use one-handed if you feel so inclined.

As there is no touchscreen on the 1200D, unlike some of the other DSLRs in Canon's range, including the 100D and the 700D, every element of camera control is done via the physical buttons.

Despite it being an entry-level model, there are still a decent number of those buttons on the back of the camera, including dedicated buttons for white balance and sensitivity (ISO).

By pressing a button labelled as Q, you can quickly scroll to various settings displayed on the screen and change them using the scrolling dial. So, for instance, you can navigate to the metering setting, then scroll with the dial to change from general purpose to spot metering. It's quicker than diving into the main menu all the time, speeding up the general workflow of the camera.

To change the autofocus point – of which there are nine available – you need to press a dedicated button and using the four way navigational pad to move to the point you need. As there aren't dozens of points, this is a relatively quick process, but you can always focus and recompose if you are in a particular hurry.

Anyone who has ever used a Canon DSLR before will easily be at home here, while those who haven't shouldn't find it too difficult to pick up and get the most from it.

On top of the camera is a mode dial for quickly switching between the various exposure modes, including the several automatic and scene options which the camera offers.