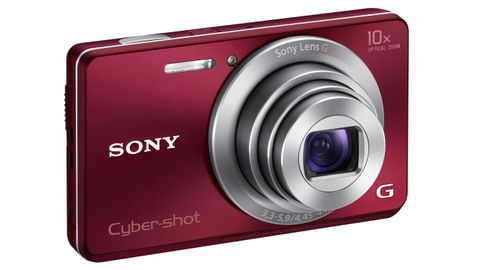 The Sony Cyber-Shot W690 is slim, stylish and has a 10x optical zoom

The Sony Cyber-Shot DSC-W690 was announced in February as part of a trio of stylish and slim compact cameras.

That lens starts at an equivalent focal length of 25mm and rises up to 250mm at the telephoto lens. Unlike some of Sony's other compact cameras, it doesn't feature Clear Zoom technology to digitally boost the zoom capability of the camera.

Other features on this tiny camera include a Bionz processor, face detection, smile shutter and an in-built guide to using the camera.

Pretty squarely targeted at casual users, a number of creative options have been included to attract the Instagram crowd.

First up we have four digital filters, or 'Picture Effects', to use Sony's parlance, such as Toy Camera, Pop Colour and Partial Colour.

Secondly, Sony's Sweep Panorama enables super-wide images to be captured by sweeping the camera across a scene and then stitching the resulting images together in one picture.

There's not a great deal of manual control available on the Sony Cyber-Shot WC90, though a Program mode does give some flexibility.

HD video recording at 720p is available, with minimal control over recording settings. Videos can also be shot in VGA mode, which is more suitable for uploading quick videos straight to the web.

A 230k dot resolution, 3-inch TFT Clear Photo screen can be found on the back of the camera, on which you can watch slideshows of your images accompanied by music that you load into the camera.