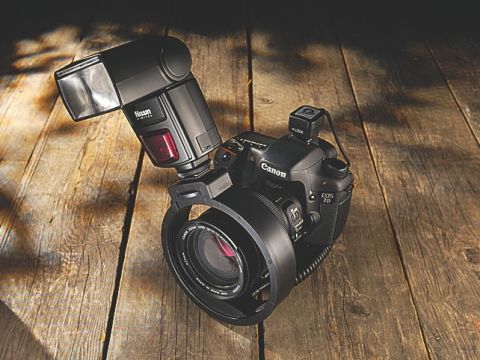 Rotate flash units on your Canon or Nikon camera

The Ray Flash Rotator claims to be the first rotating flash bracket to support TTL metering as standard. The unit accepts a standard flashgun and fixes itself into the tripod thread of a DSLR, before it enables the flash to be positioned and fixed at any point around the lens.

So, whether you want the flash to be fired from the top, side or even underneath the camera body, the Rotator enables you to do it.

The unit comes in three parts, with three separate middle sections provided to tailor the construction to the camera in use. Everything is joined together by supplied screws, while the cable attached to the main ring attaches itself to the camera's hotshoe, thereby enabling full communication from the camera to the flash.

The metal used throughout the accessory's construction gives the unit a solid build quality, although some plastic is used for the outer sections of the ring.

The flash moves freely once the locking ring is loosened, and once tightened it stays in position, although it's a shame this ring doesn't sport grooves around its edges, which would provide greater traction.

Another small grievance is that the coiled cable between the unit and the camera's hotshoe can easily swing in front of the lens, although this is only an issue with particularly short optics.

Currently available for Canon and Nikon bodies, the Ray Flash Rotator may be considered a little pricey for some, and you're also limited by how far you can position the flash away from the camera.

Still, it's perhaps the best solution of its kind, and is far more compact than similar solutions we've seen in the past.