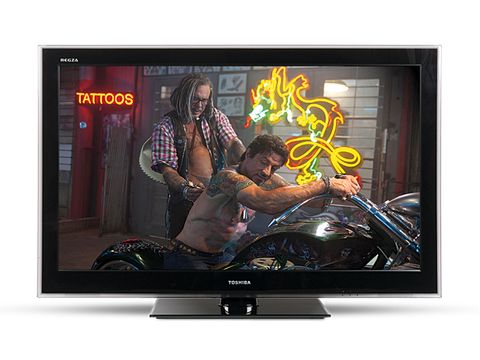 The Toshiba 46SL753, with its contemporary styling, is a 46-inch 2D LED-backlit, full HD flatscreen that can be wall or stand-mounted. However, it looks distinctly average, with a bezel wide enough to drive a bus through.

Toshiba fans hankering for a 3D experience need to wait for the forthcoming WL768 model.

The 46SL753 nevertheless builds in some impressive 21st century tech. Most notably, its DTT tuner caters for Freeview HD channels, in addition to the EPG, digital teletext, subtitles and multiple soundtracks. Analogue channels (with Nicam and teletext) are covered, too, should you live in the middle of nowhere.

Then there's the integrated media player, which will pull compatible content off your DLNA home network (wirelessly, with an optional dongle) or a USB storage device. There's also an SD card slot, meaning you can whip the card from your digital camera and temporarily convert this Tosh into a large-scale picture frame.

Unfortunately, the digital wizardry of the 46SL753 stops short of providing iPlayer compatibility. Come to think of it, you don't get internet video of any kind; the content portals so beloved by the likes of Panasonic, Philips and Samsung are conspicuous by their absence.

Fear not, though, as Toshiba has included a D-Sub VGA port for your laptop or PC. Dedicated computer hardware tends to deliver far better results from online services than the limited capabilities of a TV, and you're not ring-fenced by a brand, either.

CEC it and see

In other respects, the connections are impressive. Four 1080p24 compatible HDMI ports (one of which is side-mounted), two Scarts and a component input cater for just about every current source eventuality. The integral digital tuner has been endowed with a digital audio output and a CI slot for Pay-TV upgrades.

CEC device control (known here as 'Regza-Link') will enable the basic functions of many recent source components to be driven by the TV's handset – I found this worked fine on a Panasonic Blu-ray recorder.

The gloss-finished handset itself could be of better design. For a start, it's not backlit. Another criticism is its central joypad, which is surrounded by a disc of additional controls. The spacing between the two regions is insufficient, and as a result, you can accidentally nudge into effect the wrong function.

Similar criticisms can be made of the handsets supplied with recent Sony sets. However, Sony TVs take advantage of the company's excellent Xross Media Bar onscreen user interface. Compared to this, the 46SL753's menu system is plain boring. However, it's well-designed – making this Tosh easy enough to drive.

Indeed, the friendly wizard-driven auto-setup routine kicks off the flawless tuning process. The whole roster of functions can be adjusted from the menu system.

The 'SoundNavi' audio system, which boasts a non-adjustable graphic equaliser, can be optimised for wall or stand-mounting.

On the visual side, adjustments include colour temperature (with R/G/B tweaks), film stabilisation (motion smoothness), gamma and black/white level. Other features include sleep/programme timers; a proper mains switch; the ability to display real-time picture brightness/colour histograms; an 'expert' mode for colour calibration; (defeatable) Autoview sensor-based brightness/contrast adjustment according to ambient lighting conditions; plus a range of picture/sound modes and aspect ratios. Good stuff.

The proof, as ever, is in the pudding. And this Toshiba is a bit like a Sara Lee chocolate gateaux – good, but not Michelin standard.

With Blu-ray movies, I was impressed with the range and depth of colour offered here. The subjective balance of black, white and everything in between is also more than acceptable, thanks, no doubt, to the LED backlighting – although our Tech Labs rated its contrast below the standards set by much of the competition.

I couldn't fault the brightness or the resolution of intricate details, as seen in the Blu-rays of Moon and Transformers. However, I would recommend you experiment with the picture settings using a calibration disc to get the most natural picture.

Toshiba's proprietary processing isn't as obtrusive as that of some brands, with none of the awful 'greasing' of movement that makes film look so unnatural.

There was, however, a little backlight inconsistency, visible at the extremities of the screen during profoundly dark scenes – although this is something we're seeing quite often with edge LED TVs.

Switch to pics from the in-built tuner and things noticeably deteriorate. Compared to DVD playback via HDMI, SD Freeview pictures are rather soft – and a noise reduction feature does little to address the visible feathering that spoils sharply defined outlines.

Strangely, pictures from digital broadcasts received on a PC tuner and streamed via my network actually looked better. On which subject, the 46SL753's media player lacks supports for codecs such as x.264/mkv and DivX/XviD. A pity.

Sound quality, though, is atrocious. It may as well be coming from an old tea chest. Lifeless and dull, there's a serious mid-band wedginess that renders dialogue unpleasant to hear. Those disappointing sonics are an affront to well-produced music programmes such as Later... with Jools Holland.

The only good things that can be said here are a) Dolby Volume 'normalises' sound levels to reduce the 'jumps' frequently encountered when changing channel and b) the sound can be turned off altogether via a menu.

It's about time that flatscreen TV manufacturers paid more attention to audio, but for now, I'd advise any buyers of this TV to stick with external AV gear.

A 46-inch LED TV for £1,000 is not a bad deal, but Toshiba's problem – as has been the case for a few years now – is that Sony and Samsung can match that price with better featured sets. The 46SL753 leaves us hankering for the arrival of Tosh's CEVO TV more than ever.