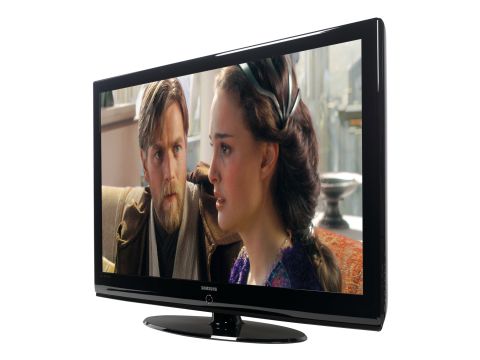 Jaw-dropping pictures and an outstanding features count to match

If you're looking for a TV which has style at its core, you have to consider one from Samsung. And the brand's new flagship LCD TV, the 52in LE-52M87BD, certainly fits that bill.

Happily, Samsung's trademark gloss black finish and taste for subtle curves extends to 52in extremely well. In fact, the bigger this design gets, the more we like it. But the LE-52M87BD isn't trading on looks alone. It's choc-a-bloc with connections, including three HDMIs, a PC VGA port, Scarts, a component video input, and a digital audio output for shunting on digital soundtracks received by the HDMIs.

Then there's its extensive feature count. As well as a digital tuner it carries a 1920 x 1080 'full HD' screen, backed up by 1080p compatibility, and a 1:1 pixel mode that shows 1,080-line sources with no overscanning, for extra clarity.

The LE-52M87BD's HDMIs, meanwhile, are compatible with the CEC industry standard, meaning you can use the TV's remote to control any CEC-compatible sources connected to them.

Even better, the HDMIs are also v1.3 in specification, making this the first TV we've seen with the potential to deliver HDMI 1.3 benefits such as the Deep Colour extended colour palette (from discs that support it) and automatic lip synch correction.

The TV also claims a contrast ratio of 15000:1 - the highest yet from an LCD TV, raising hopes that we might finally have an LCD with black levels to rival plasma.

Power of the dark

The opening space battle of Revenge of the Sith does enjoys remarkable black levels by LCD standards. There's practically none of LCD's greyness and, even better, dark scenes contain loads of scale-giving detail.

Providing an exceptional counterpoint to these revolutionary LCD black levels is Samsung's best colour performance yet. The saturations during colour-rich scenes like those on Mustafa's volcanic surface are extreme, yet the set also retains a generally natural tone with subtle fare like skin tones.

The LE-52M87BD also uses its full HD resolution and size to deliver exceptional sharpness. You can actually make out the texture in R2-D2's metallic surface.

The 52M87BD suffers a couple of weaknesses, though. First, its motion handling is hit and miss. Without the Movie Plus mode active, the fight between Obi-Wan and General Grievous suffers from movement looking rather ill-defined. But with Movie Plus activated, a quirk of the processing can cause flickering around the edges of moving objects and an overall slightly unnatural look to proceedings.

The picture's aggression regarding colour and brightness can also lead it to slightly emphasise noise in standard-def sources - but this is true of many other LCD sets too.

The best summary of the LE52M87BD's performance is 'mostly spectacular but occasionally flawed'. However, with its sumptuous looks and its extra cost over similar-sized plasma screens being mostly justified by its resolution and features, it's a TV that has to find a way onto your shortlist.