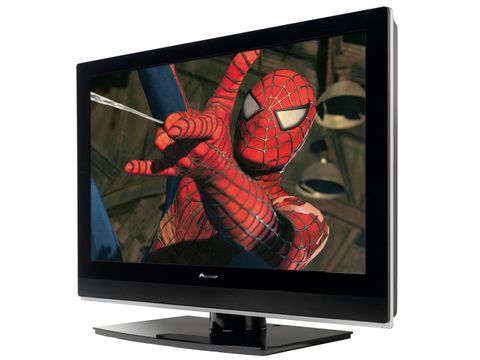 The glossy black screen frame and ultra minimalist finish give it a strikingly opulent, serious look that belies its £2k price point

It doesn't put a foot wrong with amazing clarity and colour

With Pioneer's last generation of plasma TVs winning pretty much every award going, great things are expected of its new range - as introduced by the PDP-4270XD.

Two things stand out about this TV. First, it's 42-inch instead of the 43-inch Pioneer has favoured previously. Second, it's the entry-level model from the new range, providing us with the cheapest route into Pioneer's latest, and 7th, generation of plasma screens.

There's certainly nothing cheap about its looks though. The glossy black screen frame and ultra minimalist finish give it a strikingly opulent, serious look that belies its £2k price point.

Connectivity is rather less inspirational, for the main reason that there's only one HDMI and no PC connectivity. We're assured the models further up Pioneer's range will carry a second HDMI and a D-Sub PC interface, but that doesn't stop us missing them.

Oh well - at least the HDMI can take the 1080p/24 format likely to be favoured by Blu-ray discs. Plus there's a dedicated component video jack, a healthy three Scarts, a digital audio output and CI slots that reveal a built-in digital tuner.

Also, Pioneer reckons the PDP-4270XD will deliver around nine per cent more of the visible colour spectrum thanks to tweaks made to the screen's phosphors.

Unleashed on a Sky HD recording of Spiderman 2, the PDP-4270XD's pictures are just about as excellent as we could have hoped for. Black levels stand out immediately, giving dark scenes like those where Spidey's web suddenly runs out mid swing a startling combination of natural, deep black colours and subtle background shadow detailing.

Colours are superior even to those of Pioneer's previous TVs. Spidey's outfit positively glows with vibrant blues and reds, while subtler scenes display exceptional delicacy of blend and naturalism of tone.

If you want a TV to deliver the clarity that makes HD so special, then the PDP-4270XD does that too. Check out, for instance, the detail during any distance shots of New York. Pioneer's audio heritage, meanwhile, is blisteringly apparent in the TV's superbly clean and powerful sonics, rounding out a truly outstanding performance for £2,000.

If we had to pick fault with the PDP-4270XD, it should be about £200 cheaper, to put more clear blue water between it and Pioneer's better-specified 427XD step up model. But in sheer performance terms, it doesn't put a foot wrong.