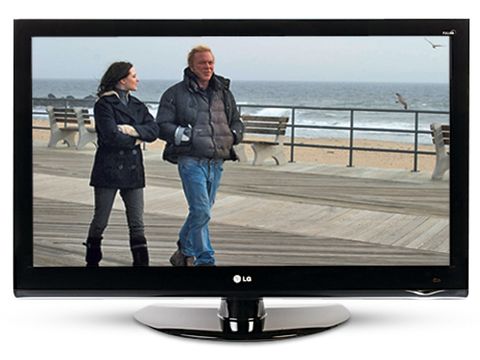 The 42LH4000 has ISF calibration settings for professional image tweaking

Although it seemingly struggles to keep up with the competition, LG's latest, the 42LH4000 LCD TV represents a significant step-up in feature-spec. 100Hz 1080p panels, ambitious video processing and 1080p24 playback are common-place across the board.

And this modest mid-priced set even offers new tricks, such as an intelligent adjustable backlight. Yet perhaps the most surprising addition is the inclusion of ISF calibration, opening the door for professional installers, engineers, or AV pedants to finetune every aspect of an image.

There have been some cosmetic tweaks, too. The glossy black bezel is actually indigo blue, with a standby light that winks at you as it powers up. The speakers are now deemed to be 'invisible' – well, the four drivers are just out of sight – and their talent for pseudo surround sound, with the help of some SRS processing, is moderately impressive.

A bit of a blur

Usability is top-notch, thanks to an excellent graphical user interface, where crisp onscreen illustrations represent each aspect of the menu, ruling out the need for any clunky text.

The auto-tuning function is easy and fast. Of course, terrestrial TV invariably looks disappointing when it's viewed on big 1080p sets, but at least here, LG's TruMotion helps to tidy up motion blur a bit.

This part of the brand's XD Engine video processing suite that has been enhanced for the 2009 generation of flat TVs. And this is where LG's new Calibration Wizard comes in. Undoubtedly the LH4000's best feature, it's just like a user-friendly consumer version of a professional ISF calibration system.

Like all Wizards, it's a case of following onscreen prompts to nudge the colour, brightness, sharpness, etc, up and down. The difference here is that you're shown one pattern alongside an ideal alternative, so that you can get one to match the other for the optimum picture. It basically takes away all the guesswork of setting up a TV without a calibration disc.

Actual ISF calibration is reserved for the professionals. To access that menu, you need to enter a code that LG engineers jealously guard, and then use some pro kit – like a light spider that clamps onto the screen. Then you need to find a chum with ISF training to set every parameter. Simple as that...

Of course, when all this has been accomplished, you will theoretically see the LG screen at its best. There's no doubt that its performance with 1080p Blu-ray material makes for a quantum leap in quality over SD.

Just be sure to switch off LG's video processing, which adds a halo of distortion around objects in HD rather than smoothing out the edges as it does in SD, to see things at their best.

But compared to many of its rivals, I thought its hi-def performance average. The contrast ratio is quoted at 80,000:1, but the reality is different.

Our Tech Labs measured real world contrast at less than 500:1. It can't match its pricier rivals with greyscale accuracy and its black bars would more accurately be described as grey. It also suffers from limited off-angle viewing.

However, this is a very reasonable price for such a feature-packed panel. And the great interface, smart styling, and excellent connectivity will win many shoppers over.