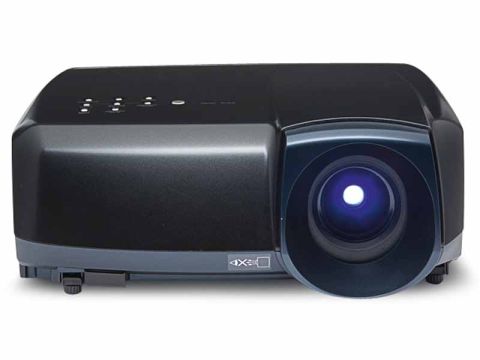 Full HD on a budget, and not too many corners have been cut either

Mitsubishi's HC5500 Full HD LCD home cinema projector replaces the HC4900, and at around £1,200 seems like a reasonable entry into the burgeoning Full HD budget market.

But competition here is gaining speed, so does the 5500 have anything to offer when put up against rivals from the likes of Epson and Optoma?

Certainly it won't win you over with its style. Square and dumpy, it looks more like a piece of heating equipment than part of a high-tech entertainment system. Still, it's light and compact, and shouldn't present any installation problems for those who want to ceiling-mount.

The 5500 is built around the highly-regarded Silicon Optix HQV chip, designed to get the best out of HD sources and to enhance SD material. Quoted brightness is 1200 ANSI lumens, and the automatic iris function is claimed to achieve a contrast ratio of 14,000:1, as well as improving sharpness.

The side-access lamp replacement system should make it easier to replace the bulb even when the unit is ceiling-mounted. Lamp life is a claimed 5000 hours, and operating noise is impressively low at just 19dB.

Focus and zoom functions are powered from the remote or the projector's on-body controls, and the Installation menu features a keystone correction as well as various power, image orientation and trigger functions. Anamorphic lenses are supported with two image modes.

I auditioned the 5500 with a wide variety of sources on a 100in screen, starting with a Panasonic DMP-BD35 playing Second Sight's Blu-ray disc of the sublime Baraka.

The highly-detailed close-ups of faces, sweeping landscapes and busy city scenes make this wordless environmental odyssey a superb test-disc – and the HC5500 didn't falter in any way.

With the lamp setting on 'high' (despite running in a blacked-out room), I noted decent brightness levels, strong, steady blacks, a satisfying and realistic colour range, and no noticeable grain. LCD panel structure was practically invisible unless you stuck your nose against the screen, and, of course, being an LCD design, there is none of the maddening rainbow effect seen on single-chip DLP devices.

With SD material, including a DTS demo DVD and Freeview via a Relook tuner, the Mitsubishi did what it could to reduce noise and MPEG artefacts, for the most part successfully, though there was some suspicion of edge noise on the upscaled images. Fast-moving sports footage was handled well.

If the model had a higher price point, I might have felt the need to be more picky, For example, its blacks are okay without being outstanding and the shadow detail is a little flat, which affects the perceived depth of the image.

However I feel you will have to pay significantly more money to find significantly better performance. Overall I think this model delivers enough wow to make big-screen gaming a thrill and movie-watching a genuine event. Which I guess is kind of the point.

In essence, I don't think buyers will be disappointed with the Mitsubishi HC5500, but I'd be tempted to spend a few hundred pounds more so that you can really dazzle those retinas.