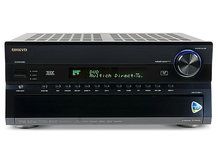 It might cost a small fortune, but this is a groundbreaking, feature-packed AV receiver with sensational audio performance and some top-notch 1080p video credentials

We don't normally review AV receivers, but since the Onkyo TX-NR906 is no ordinary amp we thought we'd make an exception.

The high-end Onkyo model boasts a wealth of video processing technology and features that make it a formidable focal point for any system.

Fittingly, for a machine with such big ambitions, it's monster-size, but it wears its bulk well with an appealing black (or silver) finish.

Starting with its enviable audio talents, the NR906 kicks out a hearty 220W from all seven channels and features three Texas Instruments Aureus 32-bit DSP chips, which enable it to decode Dolby True HD, DTS HD Master Audio, Dolby Digital Plus and DTS HD, plus Dolby Digital and DTS.

It's also THX Ultra2 Plus certified and so is best suited to rooms with a listening distance of 12ft and beyond, and comes equipped with THX Loudness Plus, a new processing algorithm that enhances sound at low volumes.

But the most intriguing features are on the video side. This is the world's first AV receiver to feature Image Science Foundation calibration facilities, which means you can pay for an ISF engineer to visit and optimise your picture quality using state-of-the-art equipment.

It will handle all your video upscaling needs, too, via a HQV Reon-VX chipset that is one of the most advanced of its kind in the world. Networking capability, meanwhile, enables streaming of MP3, WMA, AAC, WAV, FLAC and Ogg Vorbis audio from a PC on your home network or listening to internet radio through the vTuner portal.

This is all made possible by the ethernet port found on the rear. It won't come as a surprise that the connections are also phenomenal.

You'd think a receiver this complex would be a pain to set up and use, but you'd be wrong.

Much of the credit must go to the Audyssey MultiEQ automatic calibration mode, which sets all the right audio levels by taking measurements from a series of test tones using a microphone placed at up to eight positions around the room. It checks the number of speakers, listening distances and crossover frequencies to make sure you get the optimum sound quality.

The excellent onscreen menu, meanwhile, makes manual audio adjustments an absolute breeze. It's one of the most sophisticated setup menus we've ever seen on an AV receiver, using jazzy graphics and a tidy layout.

And despite being crammed with buttons, the remote is quick to master. Everything is clearly labelled and sensibly positioned, while the backlight is a helpful feature for making changes with the lights off. It can get slightly confusing when switching between the various 'remote modes' but otherwise it's a superb zapper.

We ran a 576i signal from a Samsung DVD player into one of the Onkyo's HDMI inputs and let the Reon-VX chip upscale it to 1080p before passing it onto the 46in Toshiba 46ZV555D, and were blown away by the results.

The Onkyo's upscaled pictures are wonderfully smooth and clean, plus they're infused with deep, vivid colours and convincing blacks. Test patterns on the HQV Benchmark DVD show flawless handling of the key detail, jaggies and colour tests.

After careful twiddling with the levels we were able to strike a really satisfying visual balance that made a range of DVDs and Blu-ray discs look stunning.

But audio is the Onkyo's bread and butter, and boy, does it deliver the goods. Cloverfield's Dolby True HD Blu-ray track is breathtaking, with the NR906 firing out the movie's breakneck action sequences with more power, dynamism and detail than we ever thought possible.

Dialogue is forthright and full-bodied; bass is deep and punchy and top-end detail is pin-sharp without sounding harsh. The soundstage is astonishingly expansive and immersive, with the Onkyo orchestrating the chaotic bridge scene with expert timing and smooth steering, throwing effects around the room with relish.

It also demonstrates its versatility by turning in a top-drawer performance with music. DVD-Audio material (channelled from an OPPO player via analogue 5.1) sparkles with a dazzling amount of detail, but CDs also sound warm and dynamic.

The TX-NR906 isn't cheap, but a cursory glance at the spec sheet shows that you get a lot for your money and therefore easily justifies the expense.

The feature list is staggering, but not just on the audio side – the Onkyo boasts a wide range of high-end video features that could make all the difference to the performance of your home cinema display. But the most compelling reason to check out the Onkyo receiver is its scintillating audio performance, which makes it an absolute must-buy.