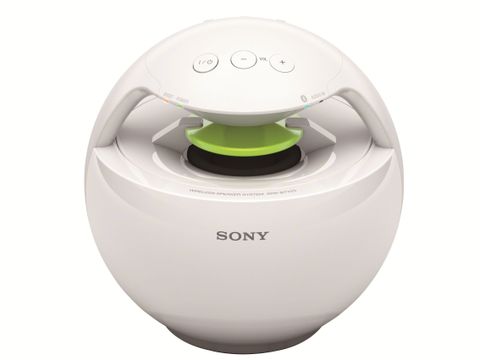 It will work with any device capable of connecting to a Bluetooth speaker, though, which includes most tablets and a fairly large wealth of MP3 players.

Bluetooth speakers aren't exactly new, and even stylish ones are fairly commonplace. But even so, it takes Sony design to make us sit up and listen. The Sony SRS-BTV25 not only looks incredible, available in black or white, but the surprisingly punchy notes that it is capable of producing set it apart from its bulky, boxy peers.

The unit boasts two speakers inside its svelte casing. The 20mm tweeter housed in the top of the unit points down at the deflector, while the 56mm woofer points upwards. The resulting sound is excellent, and just as advertised, produces a 360-degree audio that sounds great anywhere in the room.

You're obviously going to miss out on some stereo cleverness, since this is a point source, but otherwise it's generally all good. We did hit some distortion at the maximum volume, but at 13W that is surprisingly loud, and you'll be much happier at lower volumes.

Despite its minimalist design, the top of the Sony SRS-BTV25 is home to no fewer than six buttons and four LEDs. The power button is to the left of the volume controls (although you can change the volume with your smartphone or media player as well).

The rear of this top panel has a button each for selecting the Audio In jack as your source, for connecting and pairing with Bluetooth devices and a third that turns on the Bass Boost. To the rear you'll find the power connector and the Audio In 3.5mm jack as well.

There is a rather neat addition of a USB socket, which you find hidden on the right-hand side of Sony's little speaker under a grey flap. This enables you to charge your mobile phone, tablet or MP3 player while streaming music to your speaker using the power of Bluetooth. Somewhat confusingly though, this USB port is a power outlet only, so it isn't as you might expect another way of getting sound onto it.

There is another, potentially more interesting version of the Sony SRS-BTV25, called the Sony RDP-V20iP, which boasts an iPod dock and, more importantly, integrated rechargeable batteries.

This means you can take it to a park or a campsite and annoy others with your particularly peculiar taste in music. The important point is that the iPod version isn't tethered to a specific spot, and even though the power cord is 3m, it still means you've got to make an effort to work out where you're going to place it, as opposed to just leaving it untethered on the coffee table.

Our biggest problem with Sony's wireless speaker unit though, is the pricing. With a UK price of £150 we find it hard to recommend. It's brilliant on pretty much every other level, but costs twice as much as it should do. And while that might be due to the exchange rates right now, it won't help Sony sell many.