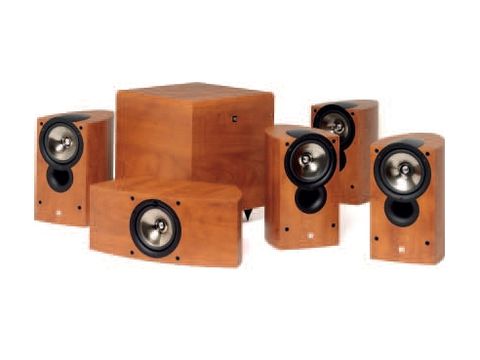 KEF's Uni-Q technology is one of the two keys to the iQ1 system, as it has been for other KEF systems over many years. But this system is not just another retread of a familiar (if proprietary) technology.

It uses a one of a new generation of Uni-Qs which uses new cone materials and surrounds, magnet designs, voice coils, chassies - and a number of other fine detail changes which means that the iQ1 system (and others in the same range) have what amount to completely redesigned, much higher performance drive units. The advantages are improved sensitivity and power handling, and improved vocal intelligibility.

The shape of the satellite enclosures is also striking. The near teardrop cross-section ensures that there are almost no parallel internal surfaces that would support internal resonances, which always have a way of passing through cabinet walls to colour the sound.

KEF has avoided the usual trick of supplying a space saver subwoofer, as some do, in favour of a moderately grown up (but still attractively compact design), with a downwards firing bass unit. Performance is hard to fault at the price.

The subwoofer is by no means a class leader, but it has moderately impressive depth, despite using reflex port loading (which the very best designs generally avoid). More importantly, it sounds controlled, with little wind noise through the port. This is partly because of the design of the port, and also because it faces downwards and is effectively baffled by the carpet it sits on.

Radiate and fade away

The iQ series satellite and centre speakers are even better. They offer surprisingly good bass extension in their own right, which relieves some of the pressure on the subwoofer. This new iteration on the Uni-Q theme helps ensure improved intelligibility, bolder dynamics and lower colouration. Vocals are easy to follow.

The only downside is that quite a lot of energy is radiated by the sides of the enclosures, despite the efforts that have been made to control the enclosure.

But for a small group of people sitting near the sweet spot, where the speakers point, the system produces a coherent, uniform soundfield well above the standard expected at the price. In brief, this is an impressive and surprisingly sophisticated and affordable speaker package.