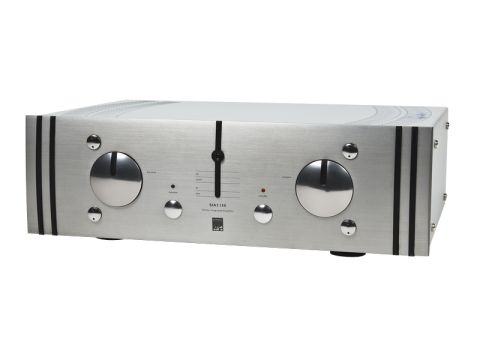 Whatever you partner it with, ATC's superbly finished amplifier seems to deliver a revealing, powerful and ultimately engaging result

The previous version of this amplifier won its Ultimate Group Test in Hi-Fi Choice six years ago and we'll be surprised if its namesake doesn't do even better. If you want dynamics and the groove it's serious competition for any amp near its price

There's a thin and often blurred line between a makeover and a redesign.

We're all painfully used to so-called 'revolutionary' new products that turn out to be last year's gear in this year's fashions. In that light, we can't help but applaud ATC and its SiA 2-150 amplifier.

ATC – Gloucestershire's finest maker of loudspeakers, amplifiers and the combination of the two: active loudspeakers – has radically redesigned the look of its cult integrated amplifier, but there's no hint of a 'Mk ii', a 'Special edition' or a 'Limited'. There's not even a change to the product name; what used to be called the SiA 2-150 amplifier is still called the SiA 2-150 amplifier.

The reason for this is simple; what's inside this box is not so different to what was in the previous version. There have been changes to the PCB layouts and extra functions have been added, but ATc has stuck with what it considers to be a pretty solid design.

This means a wide bandwidth, low distortion, low noise floor and high output power design... and all of these features were already readily available from the last model. So perhaps this is the ultimate expression of the 'if it ain't broke, don't fix it' ethos in today's hi-fi industry.

The fact that the latest version costs more than a hundred quid less than it did six years ago is apparently because ATC has refined its production process to be more efficient; there's also an economy of scale, as ATC upped the numbers it builds to accommodate demand from new markets.

Nevertheless, for a company to be able to add a better looking bit of casework and extra socketry while reducing the price in both real and actual terms is hugely impressive.

The snappy product name remains merely a stark description of its role: SiA stands for stereo integrated amplifier, 2 for the amount of channels and 150 indicates the power in watts that it's specified to deliver into an eight ohm load.

Its beautifully machined aluminium front panel is 12mm thick and offers the minimum of controls, one large knob adjusts volume while the other is used to click through the four inputs indicated by green lights in the central bar. The two smaller buttons are for standby and monitor, the latter accessing whatever is connected to the tape input, who knows it might even be a tape recorder.

There is also a slightly lightweight remote handset which can be used to do all of these things as well as mute the output. outputs consist of preamp (variable), subwoofer (fixed) and headphone socket.

The good news here is the socket is the traditional 6mm jack (instead of the all-too-common 2.5mm mini jack nicked from portable audio); the bad news is that it's placed on the rear panel, which is inconvenient but does keep the front looking good.

ATC, being a company with strong ties to the studio world, believes in power being a necessity for accurate music reproduction.

This is why this amplifier has a massive power supply that delivers a class A/B output of 150 watts. The first two thirds of which are said to be in class A.

This puts it in a pretty select group for its price; there are only two other integrated amplifiers that compete on watts per quid in our listings and both of those come from large companies.

The power on tap from the amplifier does not specifically characterise its sound but, it allows the SiA 2-150 to do things that most similarly priced integrated amps struggle with.

Primarily that is to reproduce music in a large scale, dynamic and full bodied fashion. There is little sense of compression when the demands of the material get higher, if a loud passage comes along, it is realised without distress or restraint. This can be frightening with some music.

We put on the Murcof's new Versailles Sessions disc and were pinned to the seat by the power and drama of the music. The way that the artist has recorded classical acoustic instruments and remixed them is intense and almost hyper-real when you have an amplifier that can rise to the occasion.

The SiA 2-150 does just such that, it gives you what it gets in an explicit and unpolished fashion that, speakers allowing, makes for a highly engaging and powerful musical experience.

The speaker pair that allowed this particular experience was the Adam HM2, a standmount from Germany with a ribbon tweeter that seems to be well suited to the ATC amplifier because it too can cope with big dynamics and delivers decent bass extension.

A more familiar reference is Bowers & Wilkins' 802D, a revealing and wideband speaker that offers a more challenging load than one would normally partner with an amplifier with a price tag this side of about four grand.

The ATC amplifier still delivers a lot of low end grunt; if you put some Me'Shell Ndegeocello through it the grip on offer is very impressive for an integrated amplifier at any price. This is something we associate with the brand to be frank, but the quality of timing on offer exceeds expectations – the bass stops and starts precisely, so there is plenty of rhythmic drive to the music.

This is one aspect of the sound that we don't recall being so well executed on the previous version, which was similarly 'warts 'n' all' revealing, but too hard-edged for some tastes, so the improvements are a real boon.

This incarnation is not smoothed or mellow but it is cleaner so you can play considerably louder without discomfort and the leading edges of notes have the right degree of bite. Precise without being edgy. It even coped with the testing opening to Mahler's eighth in fine form, allowing the massed voices to deliver much of their power and glory with little sense of compression.

The more expensive Leema Tucana integrated (148-watt, £2,995) delivers a bass that's 'shapely' and has an upbeat and lively character, which suggests that the top end has a greater sense of revelation. Going back to the ATC, however, confirms that it has the upper hand when it comes to solidity of power.

Perhaps equally impressive is that there is no shortfall in the timing department, because the Tucana is notably good in that respect. A closer price match was provided by Sugden's elegant A21 Se (48-watt, £2,145) which being an all class A design does not compete on power terms and required the introduction of easier speakers to the listening room.

Combined with the Living Voice Auditorium OBX-R, the Sugden produces a big spacious sound that fails to match the ATC in terms of dynamics but does have an appealing ease. While the SiA 2-150 is not aggressive, it has a lot more bite and precision than the dedicated class A design as one might expect.

In fact, the ATC amp works well with the Living Voice speaker, delivering a well balanced and tonally attractive result that benefits from the control and dynamics on offer from the amp.

Whatever you partner it with, ATC's superbly finished SIA 2-150 amplifier seems to deliver a revealing, powerful and ultimately engaging result.

It offers a degree of grip that is unusual outside of separate power amplifiers, but does not let this dominate its sound. combine all this with a confident six-year warranty and you have an amp that's extremely hard to beat.