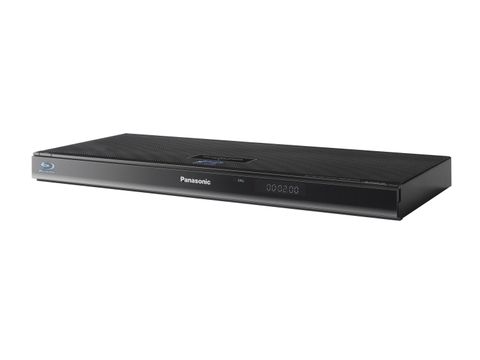 Chief among the new 3D-related features is 2D-to-3D conversion, which works with any 2D Blu-ray or DVD and was included off the back of 'significant consumer demand'.

Anyone who's seen the retrospectively converted 3D version of Clash of the Titans will know that this sort of technology isn't always successful, but given the right material it could be a worthwhile inclusion.

By the admission of Panasonic's Chief AV Engineer Tony Itani, its 2D to 3D conversion is 'conservative' so you're not going to get the same immersive depth and layering as real 3D – indeed we were straining to see much extra depth with our Inception disc.

But with the 2D Avatar disc, for example, the results are much more impressive.

It's joined by a range of 3D modes such as Screen Frame, which adds a diffused border along the sides of the picture. This softens the hard edge where the image meets the bezel, which, according to Panasonic, some people find uncomfortable to watch, although it's not something we had ever considered before it was pointed out. You can change the width and colour but whatever you do the frame is distracting. If you don't like it, you don't have to use it.

Other tweaks allow you to alter the depth of the 3D effect and the screen type, which affects the way the left and right images are composed on screen. However useful these adjustments turn out to be, we should applaud this level of flexibility.

Another new addition to the feature list is Skype, which allows you to make video calls from the comfort of your sofa.

Given the growing number of people using this VoIP service it's a canny inclusion, and works brilliantly thanks to the bright 'n' breezy user interface and nifty features like an auto answering message and the ability for callers to leave video messages on SD card when you're not there (with an upgrade available from April). The only downside is that you have to fork out around £120 for the TY-CC10W communication camera.

Networking of the more anti-social type is also possible on the DMP-BT310 thanks to its DLNA support and built in Wi-Fi. You can stream music, video and photos from Windows 7 PCs and NAS drives on your network, as well as recordings stored on Panasonic DIGA recorders.

And if you've got an iPhone or iPad, then you can control the DMP-BDT310 using your Apple device with a free app (which should have been released by the time you read this). It works with Gesture and Scrub, and even lets you carry out a couple of functions the real remote won't. You can also access content from networked devices through your iPhone.

The Viera Cast internet portal also makes a reappearance, although it's a shame that it hasn't been upgraded to the improved Viera Connect. Viera Cast's range of content is starting to feel a little tired, with key sites (YouTube, Picasa, Twitter, Bloomberg) being outnumbered by content aimed at the German and French markets. Desolée, ca ne m'interesse pas.

There's a couple of audio features peculiar to this model. Digital Tube Sound aims to replicate the warmth of vacuum tube amplifiers, with six different settings to choose from. Meanwhile High Clarity Sound simply shuts down analogue video circuitry so it doesn't interfere with the audio signals.

Finally on the features front, Panasonic has introduced a brilliant new operating system, which is one of the most intuitive we've encountered. Icons on the main menu are laid out in a cross, corresponding to the left, right, up and down controls on the top-notch remote, and a single button press takes you to the relevant option.

In performance terms the DMP-BDT310's picture quality is sublime, particularly when viewed on one of Panasonic's plasmas. The depth and density of 2D images makes them seem instantly rich and cinematic, plus the image is crammed with the sharpest detail possible.

But switch to 3D and the wow factor increases – the smoothness and clarity with which the BDT310 handles Avatar's Full HD images is truly masterful, sucking you right into the achingly beautiful Pandoran landscapes. Crosstalk and blurring are simply not an issue, and despite the dimmed glasses the radiant colours and sizzling detail manage to punch right through to your retinas. Gorgeous stuff.

Part of the reason for its success is the Adaptive Chroma Processing at work inside the player, which upsamples colour information from 4:2:0 to 4:2:2 and makes colours look a little cleaner and more faithful than some other Blu-ray players – in turn helping to deliver a deeper and more believable 3D effect.

Sonically the DMP-BDT310 is surprisingly good by Blu-ray player standards. Music sounds crisp and open, without leaning too heavily on the top-end frequencies, and there's a healthy dose of bottom end punch. Digital Tube Sound is also a welcome feature, lending an extra layer of depth, although it won't be to everyone's taste.