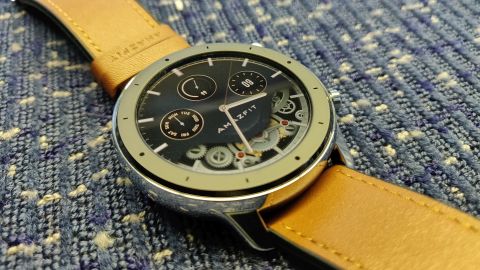 The Amazfit GTR is a solid budget smartwatch with deceptively good activity tracking, and its GPS is accurate enough to make it your main device for outdoor runs. The software feels sluggish, and its notifications are bare-bones, but its long battery life just about makes up for its shortcomings.

The Amazfit GTR is the latest smartwatch from Huami, a company backed by Chinese tech giant Xiaomi which is continuing its near two-year tradition of churning out impressive budget smartwatches under its Amazfit brand, including the Stratos, the Verge, and the Bip.

The Amazfit GTR is is another of Huami's affordable smartwatches that makes bold claims about its style, display and extended battery life.

On the specs sheet, it certainly looks like good value for its pricetag: at around £100/$170 - prices vary depending on the size and style you choose - you get GPS, a battery that can supposedly last up to two weeks with normal usage, tracking of 12 different activities, step counting, sleep monitoring, and an AMOLED display with 326 pixels per inch, the same resolution density found on an iPhone 11.

So how does it fare in practice? After spending more than a week with its 42mm and 47mm variants, we’ve come away impressed by just how much the Amazfit GTR can do, particularly with its exercise tracking. Its battery life is also among the best you’ll find at this price, even if it doesn’t quite live up to the company’s lofty promises.

It's impressive for the price, but there’s no avoiding that it’s a budget, basic smartwatch with no real app integration outside of notification tracking. Worse, its software makes the simple act of swiping through screens feels sluggish.

The GTR isn't as widely sold as some wearables, but it can be found from Gearbest in all three countries, and from Amazon in the US and the UK.

There’s a huge difference in the design of the two variants. The 42mm feels sleeker and sportier: it has a silicone strap and most of its designs are single color, giving it an understated look.

The 47mm Amazfit GTR feels more like a classic watch, with a titanium or aluminum alloy body and a traditional leather strap. The underside of the strap is silicone, which means you can wear it for exercise without worrying about damaging the leather — a thoughtful touch.

The face on the 47mm model is, naturally, bigger. We have relatively thin wrists, but it didn’t look too large: it shouldn’t be a problem unless you have exceptionally thin wrists.

Both watches have thick bodies, around 1cm deep, and when we first saw them out of the box we worried they'd look chunky. But when we wore them, they looked perfectly natural, and neither felt heavy.

Both sizes are stylish in their own right, and the matte black bezel on our units make them look more expensive than they actually are. Though note that some models come with a different color bezel.

The two buttons on the right-hand side of the watch face are sturdy, and just the right size: big enough that you can’t press them accidentally, but not so big that they distract from the display.

The size difference means they both come out at 326 pixels per inch, the same density as an iPhone 11, and that translates to a clear, crisp picture with plenty of detail. You can read small words and numbers easily, and nothing was ever distorted in our time with the smartwatch.

Bright colors looked vibrant too, and you can choose from plenty of watch faces from the Amazfit app, so we picked a yellow one that really popped from our wrist.

The screen is also bright enough to view in full daylight, and we never had a problem with sun glare making it hard to read.