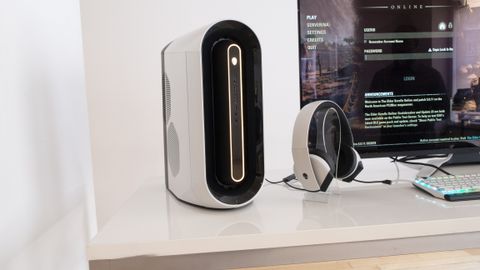 The Alienware Aurora R9 in all its elegance
(Image: © Future)

Bold, beautiful, powerful. Those are the three words we'd use to describe the Alienware Aurora R9, with its gorgeous design, easy upgradeability and powerful hardware. And, sure, it's an expensive device, but with this kind of design and this hardware, it kind of has to be.

The Alienware Aurora R9 is the latest gaming PC from the alien-themed manufacturer, following in the footsteps of the Area-51m. And, when we reviewed the Alienware Area-51m, we fell in love with its aesthetic. the Lunar Light color option and all the tasteful RGB lighting was more than enough to take it over the top, earning it 5 stars. That stunning modern aesthetic has moved on to the Alienware Aurora R9.

Now, before we get any deeper into this device – this is an expensive piece of kit, but it may just be worth it. The thermal design, aesthetics and sheer horsepower on offer should be enough to make up for the higher price tag.

The Alienware Aurora R9 was released at Gamescom 2019, and is available starting at $969 (about £760, AU$1,379). However, this is just for the entry-level model, equipped with an Intel Core i5 processor and an Nvidia GeForce GTX 1650 graphics card.

But, because this is Alienware, you can of course configure this gaming PC with the most powerful hardware you could dream of. You can pack this thing with an Intel Core i9-9900K, 64GB of RAM at 3,200MHz and dual Nvidia GeForce RTX 2080 Super graphics cards. The pricing isn't available for this top-specced behemoth, but with PC components like that, you can bet it won't be cheap.

The Alienware Aurora R9 adopts the 'Legend' design language, first used in the Alienware Area-51m, then the m15 and m17 laptops. This abandons the edgy design language that a lot of similar gaming devices offer, providing something that looks a bit more elegant sitting on your desk.

On the front of the desktop, you'll see a vertical column equipped with RGB lighting, that serves as an air intake (we'll get into that later). However, because Alienware has moved all the front ports to this column, you can easily plug in all your accessories in the dark, thanks to the plentiful RGB lighting.

And, for any enthusiasts out there who want to easily upgrade in the future, you're in luck. This tower comes equipped with tool-less entry. Once you open the side of the case, you'll initially be greeted by a hunk of metal housing the power supply, but there's a lever around the back that you can use to swing that out of the way to access all your internal components. This not only secures your components while shipping, but also helps direct incoming air to cool your components as much as possible.

For years, Alienware has been on the forefront of desktop design, but with the Alienware Aurora R9 it takes things to another level.

Now, we didn't get a chance to run any of our performance benchmarks on this system, so we don't know exactly how it will stack up when it comes to performance. However, with the hardware this desktop can pack, we have no doubt that it will be one of the best gaming PCs.

Not only does it pack the most powerful PC components on the market today, but Alienware claims that, thanks to the directed airflow, VRM (voltage regulator module) temperatures drop up to 8% over the Alienware R8, using the same motherboard and CPU. This might not mean much to you if you're not well-versed in PC hardware, but it does mean that your CPU will boost higher for longer, and that there will be more room for overclocking in the future.

And, because the Alienware Aurora R9 basically funnels air right over the graphics card, you should see graphics performance see a similar jump.

Still, we can't wait to get the Alienware Aurora R9 into our labs so we can see exactly what this beast of a desktop is capable of.

The Alienware Aurora R9 is yet another brilliant design from Alienware, and should help define what prebuilt gaming desktops look like over the next few years. The Lunar Light color option is especially appealing, as you won't have to hide your desktop in shame whenever someone comes to visit.

Paired with the powerful hardware on offer, we could see this desktop become especially popular, at least with people that can afford to drop this much cash. And, be sure to stay tuned, as we'll get this desktop in for testing to see how well it can run the latest games. But, if we had to guess, the Alienware Aurora R9 will have no problem running Crysis.