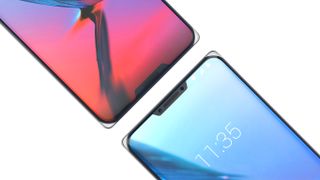 Chinese phone manufacturer ZTE appears to be doubling down on the controversial notch design in an ambitious-looking smartphone concept uncovered today.

Dubbed the 'ZTE Iceberg', we're getting a glimpse at what appears to be an Android phone with not one but two notches, and glass adornment to the chassis, according to renders shared by iF Design World Guide.

This is a first. Yes, we've seen display notches showing up on smartphones first with the Essential Phone and iPhone X, and now they're popping up everywhere.

But the ZTE 'Iceberg' design includes a top and bottom notch, and it ends up being one of the most bezel-less designs we've seen from a smartphone.

ZTE goes further with its 'Iceberg' design, making the phone chassis a single glass unibody. The glass corners of the phones are clear, which give the aesthetics a clean, pure-as-ice look.

Shoppers shouldn't expect to get their hands on this design too soon, though, as the release date details mention 'after 2018' with 13-24 months of development.

However, ZTE has already shown it can make a great standard phone with the Axon 7, and try out a flawed, but novel smartphone design with the dual-screen Axon M.

If it can marry those two positives together into one next-generation phone that looks something like the ZTE Iceberg, it may have a winner.