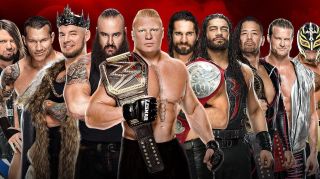 Boom! WWE's first pay-per-view of 2020 is upon us in the form of the annual high-octane chaos of the Royal Rumble. And with TechRadar's help, you won't miss a minute of a Royal Rumble 2020 live stream - regardless of where in the world you are.

Taking place this year in Houston, Texas, as ever we're expecting surprise returns, big debuts and plenty of twists. There's eight scheduled matches this year, but the expected highlight will be the mayhem of the men's and women's Royal Rumble - a battle royale match whose participants enter at timed intervals.

This year the kick-off show starts at 4pm local time, with the main card starting at 7pm ET, 4pm PT, midnight GMT and 11am AEDT on Monday.

Judging from the last couple of years, you should expect the main show to run between three-and-a-half and four hours.

There's a pretty impressive 27 of the 30 superstars confirmed for the men's Rumble, including Roman Reigns, Rey Mysterio, Seth Rollins, Randy Orton, Drew McIntyre, and AJ Styles, while Brock Lesnar will enter the match at number one.

While only seven superstars have confirmed their place in the women's match, its a big-name field nonetheless, with Natalya, Charlotte Flair, Alexa Bliss, and Nikki Cross all set to be involved in the big face off.

Outside of the Rumble excitement there's some pretty strong undercard fights, with Becky Lynch set to defend her Raw Women's Championship vs Asuka while Roman Reigns will face King Corbin in a Falls Count Anywhere match.

It's going to be a packed event for sure and we’ll show you how to watch a WWE Royal Rumble 2020 live stream online from anywhere in the world so that you don’t miss a minute.

Live stream WWE Royal Rumble 2020 from outside your country

Scroll down if you're reading this in the US, Canada, UK, Australia, Japan or India - we've described your watching options in more detail down there (assuming that the WWE Network doesn't tickle your fancy).

But if you're unlucky enough to be in a country where the only way to catch the wrestling is via some dodgy, illegal stream you've found on Reddit - or if you discover that your home coverage is geo-blocked where you are- then we have a top tip to get a much better way to watch.

You'll need to use a VPN to dial in to a country that has legitimate coverage of the event. A Virtual Private Network is perfect for this as it allows you to change your IP address so you appear to be in a completely different location. We've tested hundreds of VPNs and can recommend ExpressVPN as the best VPN provider currently available.

For starters, ExpressVPN comes with a 30-day money back guarantee, which means you can always try it out without obligation. You can watch on many devices at once including Smart TVs, Fire TV Stick, PC, Mac, iPhone, Android phone, iPads, tablets etc, but what we really like about it is its speed, security, simplicity to use and excellent 24/7 customer service. Check out Express VPN now and you'll also be able to claim 3 months FREE and 49% off with your annual plan.

Live stream Royal Rumble 2020 on the WWE Network (for FREE!)

First thing's first...the WWE Network is your first stop for the most comprehensive wrestling coverage on the planet. It's a paid subscription service (think Disney Plus, but only for the WWE) available pretty much anywhere in the world, from Afghanistan to Zimbabwe and including the US, UK, Australia and Canada.

The list of devices you can watch on is almost as lengthy, with apps for iOS and Android, PlayStation, Xbox, Apple TV, Roku and Smart TVs all included.

The cost of course varies from territory to territory, but the $9.99 or £9.99 monthly bills in the US and UK should give you a good idea. That includes the Royal Rumble live stream and the ability to re-watch every PPV the WWE has ever put on.

Just wanting to watch tonight's event and don't want the WWE Network after tonight? Then there's a free month trial available, too. Head to the WWE Network to sign up and new subscribers can test out the service for themselves for a full month.

Your other ways to watch WWE Royal Rumble 2020 live stream

If you’re watching from the United States, then subscribing to the WWE network is your best bet as it is the most cost effective way to watch. Other pay-per-view providers including Dish and Xfinity are showing WWE Royal Rumble 2020 but they cost upwards of $44.99.

How to get a WWE live stream in Canada tonight

As is the case in the WWE’s home country, the WWE Network is also the cheapest, most convenient place to watch WWE Royal Rumble 2020 in Canada. However, you could choose to go with SaskTel, Shaw or BellMTS but expect to pay similar prices to PPV providers in the US.

How to stream WWE Royal Rumble 2020 live in the UK

It's the beginning of a new era for wrestling in the UK. Sky had been the home of the WWE for decades, but BT Sports has swooped in to become the new official broadcaster of the WWE in the UK.

The Royal Rumble will be shown exclusively live through BT Sport Box Office for a one-off payment of £19.95.

The coverage is available on services and devices like Sky, Virgin TV, as well as via the dedicated BT Box Office app for Android and iOS.

If you’re in Australia, then WWE Royal Rumble 2020 will be shown live at 10am AEDT on Monday morning on the Main Event PPV channel for $30.

Luckily though, WWE Network is also available in Australia, so that’s also a good choice if you’d prefer to save some cash and even be able to re-watch all of the WWE's PPV events.

How to live stream WWE Royal Rumble 2020 in Japan

Wrestling fans in Japan won't want to miss Asuka's showdown Becky Lynch - and there's a few options for tuning in. The main card will start at 8am on Monday morning in Japan.

The WWE Network has been available in Japan for the last few years, which makes it automatically the most affordable way to watch. Alternatively, DMM.com, J:Com and Sukachan are all listed as offering PPV options.

How to watch WrestleMania: India stream

WWE fans in India can tune in to watch WrestleMania 35 on Sony Ten 1 and Ten 3 on their televisions. The kick-off show will be telecasted live from 3.30am IST with the main event beginning a couple of hours later..

The WWE Network is also available in India for those who want to watch every PPV event and even re-watch them later.