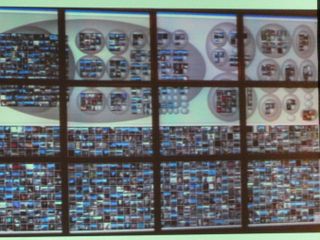 Gordon Bell's life was shown spread over on 18 screens

For the last 10 years, Gordon Bell and Jim Gemmell of Microsoft Research have been scanning and digitising their entire lives: documents, phone calls, files, chat sessions, email, the web pages they read, the TV and radio shows they watched and listened to, where they want, what applications they had open...

Over the next 10 years, you're going to do the same, Gemmell told the Storage Visions conference at CES 2010.

"You will record way more of your life than in past history," Gemmell says, because of three trends. "We're already wandering around with digital cameras, phones with cameras that record audio and some of them know your location… as time goes by we get the sensed world.

The technology is going have to be automatic, he concedes; "you can't expect people to do a lot of work".

You can't buy the Microsoft Research sensecam he wears that automatically takes pictures when the light level changes (because he's probably gone into a new room) or when the infrared reader detects the heat of a body in front of him, but not when the motion sensor says he's moving too much to get a good shot.

But you may not need to: "Every week there's a new announcement of a device that supports this," Gemmell points out; "the iPod Nano has video and a pedometer, Samsung has a new GPS camera…"

He lists a mix of personal and medical devices: wireless blood pressure cuffs and devices that measure the level of blood oxygen, transmitting pacemakers, smart fabric that use the PH level of your sweat to tell you if you're dehydrated, the Bodybugg that measures how far you walk and how many calories you burn. "Eventually," he predicts," it is going to be commonplace to have things in our bodies.