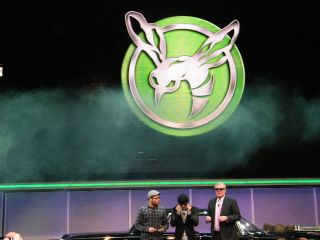 Sir Howard and Seth Rogan on stage for CES 2011

Sony rounded off a packed day of CES 2011 press confernces with an impressive display of technological pomp and ceremony.

While the rest of CE manufacturers tend not to add the wow factor to their press conferences, Sony brought out the big guns – namely movie star Seth Rogan and whole host of Cirque du Soleil performers.

The whole show was a statement of intent that Sony wants to be the number one electronics manufacturer in the US.

Its latest line-up of devices certainly puts them in good steed. There's no less than 27 new Bravia TVs launching this year, with all the 3D and connected bells and whistles you have come to expect from Sony.

Its flagship television, the HX929, is a thing of beauty – offering impressive pictures with its X-reality engine and edge lit LED. And, of course, 3D.

3D does come at a price, though, with the Vaio PC looking to land in the US in February for a mammoth $1,700.

Sir Howard Stringer is still completely enthused with 3D and his keynote reflected this, explaining that 2011 is the year that "3D gets personal".

This is because Sony is launching a consumer 3D camcorder in the spring – the world's first consumer camcorder that offers double Full HD quality. Alongside this was a camcorder with a built in projector.

Couple this with a refresh of its Cyberlink line, making the cameras 3D capable and a 3D version of the Bloggie and Sony has gone all out with 3D this year.

But it is not just 3D where Sony is focusing its efforts. It seems the company's connected cloud-based services are also burgeoning.

In its portfolio Qriocity (which has movies and music) nestles next to the PSN and newcomer Music Unlimited will be coming to all connected Sony products.

Perhaps what was more enticing though was not what was announced but what is 'coming soon' – both in the near future and beyond.

A throwaway comment by Sony's Kaz Hirai confirmed that a tablet range will be coming in 2011.

Hirai hinted that tablets were incoming and will use the power of Sony's connected tools, including the PSN, Qriocity and Music Unlimited.

Sony gave no more details about the tablet other than that it was in the pipeline.

It will be interesting to see what brand the tablet falls under.

It sounds too entertainment based to be a Vaio product, not TV enough to be Bravia and it's unlikely it will be developed with Ericsson, so it isn't going to be a Sony Ericsson tablet.

So, could this mean that we will see a PlayStation tablet? It's pure rumour and speculation at this point but a tablet-based gaming device that offers up connected content would be something special that would truly rival the iPad.

A tablet PC is sorely missing from Sony's massive haul of products so it will be much welcomed when it arrives.

Sony also showed us a glimpse at what it is currently working on. The next generation of TVs look to be imaging marvels, with a 56-inch 4k LCD panel, 46-inch panel 2K and a 24-inch OLED TV in the works.

The company also showed off a concept of a glasses-less portable 3D Blu-ray player and perhaps the eventual jewel in Sony's 3D crown, a personal 3D viewer.

It looks like a space age virtual reality eye piece and delivers 3D content to you and you only.

Sony has earmarked 2013 as the year it will become number one in the US for consumer electronics. With so much emphasis placed in 3D and connected TVs, it will be hoping that if it dangles these features in front of consumers long enough – one will eventually get a bite.