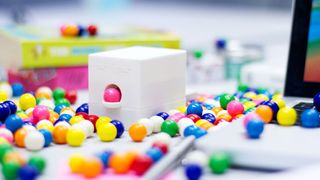 And this is what you get when you go viral

Treats - What if you got a sweet every time you were retweeted? Or the lovely scent of cut grass wended its way to your nostrils whenever you got an @reply? It would be kind of pointless, we agree, but also really quite sweet. These Olly and Polly devices are concepts at the moment so you can't buy them but you can make your own if you happen to have a 3D printer and some technical know-how going spare. [Ollyfactory]

Buzzy - Ptch is getting all kinds of web buzz today which means absolutely nothing because remember Color? No. No one does. Anyway, it's a bit like Instagram except it's got more music and videos and less dodgy retro filters, and DreamWorks Animation is backing it so it might do quite well even though they forgot the 'i'. [Ptch]

Printy joe - Meanwhile in tiny printer land, there's this one. The Oksu would let you print out little bits and online pieces on Z-Ink paper with NFC chips in each card so you can do some real world linking. Sounds kind of cool but it's only a concept so there's no telling how pricey it could be. [Dvice]

Pi in the sky – One Raspberry Pi has made it up to the highest heights after being tethered along with a webcam to a helium balloon. It made it all the way up to around 25 miles before the balloon popped and it came back down to earth with a bump. Not 100% clear what the point of the exercise was but it looks like they all had a nice day out anyway. [Dave Akerman]

Kevin Spacey - SpaceX went to space and all we got was this lousy 2.5 minute video highlight package. Actually it's pretty spectacular. Kind of puts us in the mood to watch Armageddon, who's with us? Anyone? No? [Dvice]

Wearing thin - A couple of days ago, we told you about Dr Steve Mann who was attacked in a Parisian McDonald's because of his AR glasses. McDonald's insists that its staff were nothing but polite to the don of wearable tech, to which Mann has responded with more pictures of the alleged assault. [SlashGear]

Tivo rises - You can't have failed to notice that The Dark Knight Rises is out this week because they've been pumping the information directly into your cerebrum through subtle yet invasive techniques we're not allowed to talk about. If you haven't already had enough of the film, Virgin Media Tivo now has a special TDKR app with trailers, clips, interviews and character bios that you can check out. [PR]

London and 2012, but not at the same time - You've got just over a week to get your in-no-way-affiliated-with-the-big-sporting-event-happening-in-London-this-summer Griffin national pride iPhone cases for £14.99. [Griffin]

Education alert - Google has set up shop at London's Science Museum where it has five interactive installations that you can play with from anywhere in the world. Head over to South Kensington or to Chromeweblab.com to have a play. [Google]

Po-Po - The 5-0 arrested a man. Using his phone, the police impersonated him by exchanging text messages with his contacts, arranging drug deals at which they then arrested the correspondents. And apparently this is legal. [Ars]