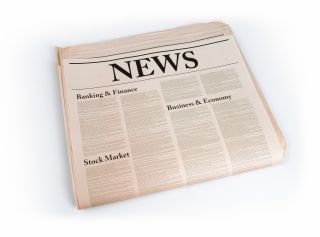 Extra extra, read all about it! The Queen likes Samsung!

It's a big day for the Queen today, as she makes her first appearance in One More Thing having given Samsung the royal nod.

Impressive, but is it as impressive as Apple's appearance in almost half of the box-office topping films of 2011? Or as impressive as 3D printers hitting the catwalk at New York Fashion Week? Yeah, probably actually. Come on, it's the Queen!

One approves – Samsung has only gone and got itself the Queen Royal Warrant, meaning it can now market itself as TV supplier to the Queen. It joins such esteemed company as Heinz, BT, Carphone Warehouse and Shield Pest Control UK. [Sammy Hub]

Brainwashed – Apple has topped the chart of most placed products in 2011's top box office movies, just like in 2011, 2010 and 2009. Cupertino's gizmos showed up in 17 of the 40 number one films in the US last year, not least Mission Impossible 4 in which they spent more than five minutes on screen in total. [Brand Channel]

And the winner is – BAFTA has announced the nominations for the Video Game Awards 2012, including the only one you can vote for: GAME Award of 2011. In contention are Battlefield 3, COD:MW3 and LA Noire, among others. But if the other BAFTAs are anything to go by then the smart money is on The Artist. [BAFTA]

Deal of the day – Bargain-loving camera hunters, rejoice. Asda has its £25 Kodak M200 back in stock in all its 10MP, bankruptcy filing glory. Or it did when it sent us the press release this morning. It's probably gone by now. [ASDA]

Fear of gnomes – Some people fear being eaten alive by sharks, others running out of air in a small enclosed place, but of 1,000 employeed people in the UK, 66% fear being without their mobile phone. Fear. Not just inconvenience, not just loneliness: actual fear. They call this nomophobia, apparently. They ought to just call it ridiculous and have done. [SecurEnvoy]

Traitor! – Bill Flora led the team what designed Windows' snazzy new Metro UI, but a picture of his workspace has revealed that he uses Apple Mac products almost exclusively. That's not living the brand, Flora. Well, it sort of is – he just got the wrong brand. [Gizmodo]

niceTRY – MSN is launching msnNOW, a social reader that is not a social network at all but if it ends up being a social network then who is MSN to complain? It's all about trending stories which it will take from Facebook, Twitter, Bing and BreakingNews.com and disseminate across Facebook, the web and in a mobile app. Synergy. [Mashable]

Maximum pain – Are you ready for this? It's the official trailer for Max Payne 3 which reveals the back story to Max's adventures through the seedy underworld of São Paulo. It's all because of a girl, of course. C'est la vie. [PR]