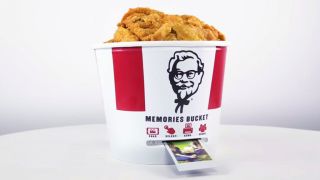 To celebrate 60 years of serving Canadians an assortment of chicken-like foodstuffs, KFC has released a YouTube video teasing the arrival of its new Memories Bucket.

This Bluetooth-enabled chicken bucket (there's a sentence I never thought I'd have to type) connects to your smartphone or tablet, allowing you to print out polaroid-style photos of your chicken-eating shenanigans – because really, being bloated, covered in chicken grease and filled with regret is the perfect time for a photo opportunity.

The photos appear from a hidden compartment at the base of the Memories Bucket, leading us to believe that it holds less chicken than a regular bucket, which is somewhat of a step backwards in chicken-holding technology.

This is not the first time that KFC has embraced Bluetooth technology – two months ago, German chicken lovers were gifted with paper-thin disposable Bluetooth keyboards instead of tray liners, allowing them to chow down and chat without sliming their smartphones.

Check out the video below to see the upcoming Memories Bucket in action – it's picture snappin' good.