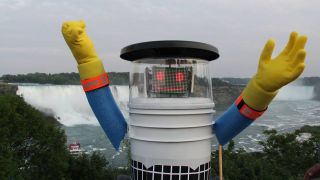 Starting today, you might see Hitchbot the robot standing on the side of a freeway in hopes to get a ride across the US.

"We believe that through this artwork, we can learn a lot in terms of social robotics and how we approach robots in non-restricted, non-observed environments," Dr Zeller and Dr Smith said of Hitchbot in a statement.

The robot has already made its way across Canada and Germany, and has even vacationed in the Netherlands. The Canada trip took 26 days and covered 6,000 miles.

"Usually, we are concerned whether we can trust robots…but this project takes it the other way around and asks: can robots trust human beings?" Dr Zeller said.

"Hitchbot was very well received as it made its way across Canada, Germany, and the Netherlands – proving that robots can indeed trust humans."

On its website, Hitchbot explains itself as: "Simply put, I am a free-spirited robot who wants to explore the world and meet new friends along the way. I am an avid Instagrammer and tweeter."

"On my downtime, I can appreciate a good game of trivia and would never pass up any opportunities to bake desserts."

Hitchbot stands at about 3 feet tall and 25 pounds. He sports a camera, a microphone and a speaker system, as well as 3G and GPS capabilities.

If you end up picking up Hitchbot, you can either pass it over to others you meet, leave it at a shop or gas station, or you can leave it by the side of the road by setting up its kickstand and raising its thumb.

For its great American road trip, it even has a bucket list, including "Vegas!", Disney World, seeing the lights of Times Square in New York, taking selfies with the Lincoln Statue in Washington DC and the Hollywood sign in Los Angeles as well as doing the wave at a sporting event.

It's journey will begin today from Salem, Massachusetts, with hopes to see all the sights on its bucket list before finishing up at the Exploratorium in San Francisco, California.