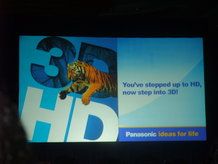 Full steam ahead for Panasonic and 3D Blu-ray

If there's one word that can describe a Panasonic keynote it's Big. Last year, the company unveiled the world's biggest plasma – a whopping 150 inches – this year, they decided not to compete with size, but debut something a little more in your face.

This year for Panasonic was the year of 3D. Although it wasn't a world exclusive showing of the company's Full HD 3D TV – CEATEC in Japan can lay claim to that – but it was a first for US eyes.

At 103 inches, it's fair to say that the TV won't be installed in many houses but it does mark a significant site for Panasonic and its total commitment to 3D.

This was backed by news that Panasonic has invested in a Blu-ray 3D standard, much like it did with Blu-ray before it.

In fact, Panasonic promised that it will start full on production of 3DTVs with 1080p playback as soon as 2010, and they have created a production plant to help things move along that little bit faster.

To make sure that we all understood the importance of 3D in the home, a video of director James Cameron was shown singing the praises of 3D and Panasonic's products.

After a slow start where no new products were actually announced, the product ball finally started rolling with the Z1, or to give it its full name – The Neo PDP eco Z1 Viera. Neo PDP, bringing three times the brightness of the company's 2007 range. Or if you care about the environment, you can stick to the 2007 brightness and power the TV at an ultra-low level.

Oh, and did we mention the TV is just an inch thick? The demo model looked positively tiny, despite the Z1's 54-inch screen size.

Back to Blu-ray, three new players were launched the BDP-120, 320 and 23. All of the players come with Viera Cast compatibility, so widgets and movies can be streamed through the devices.

The content you can get if you live in the US has been expanded also, with Amazon Video on Demand, YouTube, Picaso and Bloomberg now available for streaming at the touch of a button.

If its portability you want from Blu-ray, then Panasonic's portable Blu-ray player will be for you. It's the first of its type in the world. With a small screen, and quite a clunky body, it may well stay as the only one.

As for the companies extensive camcorder and camera range, well it's just got a whole lot more extensive – with 19 new camcorders announced and whole new Lumix range.

Three of the camcorders house a world's first. The SDR-H80, SDR-H90 and SDR-S26 have the impressive boast of being the first-ever camera feature 70x zoom. Quite why you would need to zoom that much is beyond us – unless you want to peep into your neighbour's house without them knowing.

Overall Panasonic managed to impress TechRadar with its latest range of products – while nothing blew our mind, 3D Blu-ray when it eventually rears its head should be something quite special.