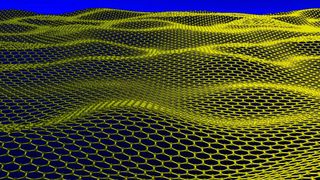 Graphene: is there anything it can't do? (Hint: no.)

It's able to make the internet run 100 times faster and produce flexible, super-thin, almost invisible wearables – you've probably heard of something many are calling a 'wonder material': graphene.

It's certainly different from the boring old silicon we're used to – after all, one million sheets of graphene are just a single millimetre thick. Many think we could be on the brink of a new industrial revolution.

The first truly two-dimensional crystal, graphene is the thinnest, strongest, lightest, stiffest material ever made. It's transparent, it's flexible and it conducts both electricity and heat very well.

So, as you can see, if it lives up to its potential it could change pretty much everything we use and need each day. But how realistic are the claims made on its behalf?

Why is graphene so exciting?

Graphene can do almost anything that makes technology brilliant – and do it better. Want lithium batteries to last ten times longer, but take only a few minutes to recharge? Graphene can do that. Want to make bendy touchscreens, or print solar cells, or make something harder than diamond? Check.

Want to make thin, light structures that are 200 times stronger than ones made from steel? Graphene's good for all that too. It can even be used to create motion-sensing windows that read gestures, nano-sensors that detect breast cancer and smartphone batteries that recharge in just a few minutes.

Graphene was discovered – via some Sellotape and the graphite in a pencil, no less – in 2004 by Sir Andre Geim and Sir Konstantin Novoselov at the University of Manchester, both of whom earned a Nobel Prize for Physics in 2010 as a result.

Speaking at Mobile World Congress in February 2016, Novoselov explained why the world was so excited about his discovery rather succinctly: "All the carbon atoms are arranged in a 2D frame, one atom thick fabric.

"Despite being so simple, it attracts many superlatives – it's the strongest possible material, the most stretchable, the most permeable, the most conductive … there are other materials that have one of those properties, but here it's combined in one very simple crystal."

Since the graphene industry is predicted to grow from US$20 million in 2014 to more than US$390 million in 2024, there are obviously a few people interested.

Since 2005 there have been over 25,000 published patents, with about just under half of them first filed in China, 18% in the USA, and 13% in South Korea. Just 1% have been filed in the UK despite, some dubbing it the 'home of graphene' – large amounts of government investment have been ploughed into the nascent UK industry as it seeks to claw back some of the deficit against the rest of the world.

Graphene can deliver what we all want – bendy phones and ubiquitous, embedded electronics and wearables that communicate with each other instantly.

"Things are not really flexible or transparent, there's always a technological trade-off, but with graphene we can build this whole ecosystem of flexible and transparent, functional devices that can do the same as your phone, but integrate it into your clothes," he adds.

There are already graphene-coated ski jackets, mattresses and 'performance underwear' (snigger) – but the next level of integration, using graphene-based inks, is all about wearable electronics, AKA smart clothing.

In the world of opto-electronics, graphene's sensitivity is helping create spectral sensors for wearables that use light to reveal everything from your heart rate and the contents of your blood, and for phone apps that can scan food and even see how ripe a tomato is.

A trip to the supermarket will never be the same again – you'll be able to check that you're getting fresh produce by simply taking a photo of it..

Graphene is talked up as ideal for creating batteries that charge super quickly; there's already one on the verge of commercialisation called Zap & Go.

Apple is interested in graphene, too, taking out a patent to use graphene to create smaller heat-sinks for the batteries in its phones – thus making room for a bigger battery without making the phone bigger – although that's unlikely to happen for at least a few years.

Such a phone would be a lot lighter because you'd need less copper and aluminium inside, and possibly cheaper, too; graphene comes from carbon, which is abundant, unlike copper, aluminium and other metals.

Graphene could be great for the environment

Today's vehicles, even electric ones, still face the same old problem: cars, trucks and trains are heavy, and pushing something heavy at high speed uses enormous amounts of energy.

Graphene-based batteries are very likely to be the enabling technology for electronic cars; instead of a five-hour wait between trips, you could top up in five minutes, removing an inherent current limitation with the tech.

Others have found uses for graphene essentially to create super-fine sieves for desalination (catching the salt from sea water, so creating an inexhaustible supply of drinking water), cleaning-up oil spills by removing all impurities in water, extracting radioactive materials from water, separating hydrogen ions and even for mining and fracking.

And then a light appeared …

However, graphene's Eureka! moment could yet be the humble lightbulb; a spin-off company from the University of Manchester called Graphene Lighting is presently commercialising an LED lightbulb that uses graphene as a filiment, and that will last twice as long as regular LED bulbs, shine brighter, and be much cheaper when mass-produced.

Given that the lightbulb market is predicted to be worth around US$123 billion / UK£87 billion by 2020, that could be a big step forward in commercialising graphene – one of the first real-life 'killer' apps for the new material.

Tthe question of where the light bulbs will be made is still up for debate.

So what's the hold up?

There is, however, a problem with graphene production. Demand far outstrips supply for defect-free graphene, so various manufacturers are taking different approaches, one of which is using lower-grade versions of the material in large amounts.

There's a good reason for this, aside from boosting production: a graphene flake is the most conductive thing on the planet, and even lower-quality graphene is good enough to compete with metals.

"There are a thousand suppliers of graphene," says Michael Hill King, Collaboration Director UK R&D Centre at Huawei Technologies UK, which is investigating whether graphene could be used in creating smart devices.

"The big challenge is knowing exactly what one is buying as graphene has many forms, sizes and variability."

So if graphene is available – even in less pure forms – why are consumer electronics companies not issuing us all with graphene-crafted devices already?

Here's the big issue: for now, electronics-grade silicon is about 800 times cheaper than graphene. And while bendable phones sound cool, do consumers really see that as the next step in the evolution of the smartphone?

"For advanced electronic applications, it all depends on investment and a near-term use for it – if someone finds an application and puts a lot of money into it, it can be done in two years because all the basics are there," says Goossens.

"Samsung is putting a lot of money into graphene, but we don't know why it's not taking the next step – I don't think [it's] found the right application so far."

Such are the advantages of using graphene over silicon that it looks like it'll be a matter not of if, but when smartphones and wearables are built using graphene – and therefore it makes sense that a big brand like Samsung has sought to take an early lead in creating patents for the material, even if it hasn't worked out a defined use yet.

For graphene to become a viable and cost-effective alternative to silicon, the likes of Samsung, Apple, Intel, Qualcomm, IBM et al need to include graphene components in a device, and invest in guaranteeing a supply of top-grade graphene.

Only with mass production – the barrier to all new innovations becoming a success – will we get ubiquitous, flexible and long-lasting electronics, and truly smart devices with graphene at their core.