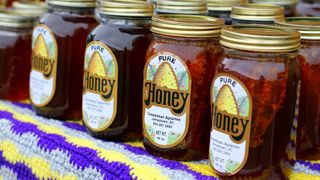 Carbon nanoparticles are a wonder material for doctors. They're small enough to get past the body's immune system, scatter light in a way that lets them be easily spotted, and can carry payloads of medicine to particular tissues.

But until recently, they've been a pain to make - requiring expensive equipment and several days of purification processes. Now, bioengineers at the University of Illinois have worked out a far cheaper method that takes just a few hours.

"If you have a microwave and honey or molasses, you can pretty much make these particles at home," said Dipanjan Pan, who led the research. "You just mix them together and cook it for a few minutes, and you get something that looks like char, but that is nanoparticles with high luminescence. This is one of the simplest systems that we can think of. It is safe and highly scalable for eventual clinical use."

The resulting nanoparticles are less than eight nanometres in diameter (ten thousand times smaller than a human hair) and can be used to deliver medicine to the exact part of the body where it's needed. "These tiny particles are kind of camouflaged, I would say; they are hiding from the human immune system," said Pan.

The discovery should aid in the fight against cancer and other diseases. "You can load it with two drugs, or three, or four, so you can do multidrug therapy with the same particles," said the other lead author Rohit Bhargava.

"We can make them glow at a certain wavelength and also we can tune them to release the drugs in the presence of the cellular environment. That is, I think, the beauty of the work."