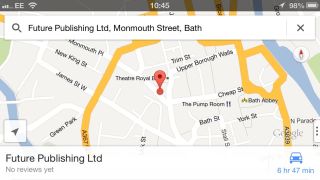 Google Maps has arrived back on iOS

Is it any good? Our columnist Gary Marshall says it is. In an in-depth comparison, he argues that "if you know exactly where something is then Apple Maps will get you there, but for everything else we'd go with Google": Google's Maps app isn't just more accurate than Apple's, but it's faster and nicer to use too.

As Marshall explains, the problem facing Apple is that "as far as the world is concerned, Apple maps are crap". Even if Apple throws huge piles of money and people at the problem, Maps' terrible reputation could be hard to repair.

"It looks rather like Apple had a once-in-a-lifetime opportunity to beat Google, and it blew it," Marshall says. "It brought a spoon to a knife fight, a tin sword to a tank battle, a Reliant Robin to a road race, a Budweiser to a beer festival".

With some irony, Google's iOS app is making Apple's operating system more attractive - "You can come back now! It's safe again!", Marshall snickers - but it isn't doing the same for Windows 8 or Windows Phone 8: Google reckons Windows and Windows Phone apps aren't currently worth the effort.

As Michelle Fitzsimmons reports, the problem is "a perceived lack of interest": Google Apps director Clay Bavor says that users "are not on Windows Phone or Windows 8." For Google, iOS and Android are where the action is.

Did someone say action? According to some of the more excitable bits of the internet, it's getting harder to find any online because Google's got rid of all the rude stuff. That's nonsense, of course, but Google has changed its SafeSearch settings, which means a typical image search should be considerably less rude.

Previously there were three levels of SafeSearch: strict, which wouldn't let you see an overly shapely table leg lest you become crazed with desire; moderate, which would probably let you look at Mail Online, but not the creepy bits; and none, where even the simplest search would uncover hitherto unimaginable forms of filth.

One name we're not going to try any action-packed Image Searches for is Google's faintly frightening Eric Schmidt. This week, Schmidt has been thinking a lot about pie. As he explains, Android is a pie, and everybody likes pie, so Google's core strategy "is to make a bigger pie".

In quite possibly the worst segue Week In Tech has ever attempted, pie makes us think of Pie Jesu - and of course, that makes us think about the Catholic Church, which is headed by The Pope, who joined Twitter this week. No, we can't believe we crowbarred that in either.

Pope Benedict XVI has joined Twitter, and he's happily posting from an iPad. It's not a huge surprise - he urged young Christians to "join the network of relationships which the digital era has made possible" earlier this year - but it's safe to say that his first tweets may have disappointed anyone expecting big LOLs or a holy rickroll.

According to Vatican spokesperson Frederico Lombardi, @pontifex isn't "the kind of person who will be checking his tweets at lunch." Translation: don't expect a retweet.