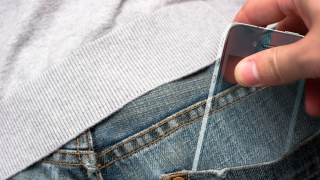 Invisibility is no longer an impossibility

Imagine a smartphone that remains "cloaked" until its owner whispers a pass phrase. It's an incredible concept, but could it be that the ultimate smartphone security feature is invisibility?

If you think that sounds crazy, how about rendering an entire car or a space ship invisible? Even crazier, it's rapidly becoming science fact rather than science fiction. And that's because it's not only been shown to be possible within the laws of physics, but it's being worked on by scientists and researchers right now.

It wasn't always the case. Even 10 years ago, cloaking devices were still thoroughly shackled to the realm of science fiction and thought to defy the laws of optics.

But in 2006, scientists from the UK and US created an incredible new material that appeared to do just that.

And this week researchers at Cambridge University have announced the discovery of a new technique that could one day be used to render invisible anything from an iPhone to a space station.

So what techniques could we use to render objects invisible and when can we expect an invisible smartphone?

"The key to any sort of 'invisibility' effect lies in the way light interacts with a material. When light hits a surface, it is either absorbed or reflected, which is what enables us to see objects."

The most obvious method of making something invisible is to use what's often called optical - or active - camouflage.

By photographing the scenery behind an object and projecting that image on to its front, you'll render it partially invisible.

This was the concept behind James Bond's invisible Aston Martin in Die Another Day. But while this method can actually be quite effective from one angle, there are obvious weaknesses when it comes to viewing the "invisible object" from positions. The technology is still finding some excellent practical uses, though.

For example, you can potentially project the view from underneath a plane onto the cockpit floor so that a pilot can have a much better idea of where the runway is. In the same way, you could project the ground underneath a car onto the hood so that offroad drivers can more effectively navigate tricky terrain. The transparent cockpit idea could also be used to eliminate car blind spots.

This technology has already been mooted for practical uses by companies such as Land Rover, which showed off its Transparent Bonnet virtual imaging concept back in April. Cameras located in the vehicle's grille capture data which is used to feed a Head-Up Display, effectively creating a view of the terrain through the bonnet and engine bay.

It's a realistic and promising method of seeing through objects but almost completely useless for making objects such as an iPhone invisible. For that, you're going to need an understanding of quantum mechanics and the ability to manipulate materials at the smallest of scales...

When you think about it, invisibility isn't actually that strange. Have you ever wondered what air looks like? How about glass or other clear fluids?

Water is visible only because of the way it bends and distorts light as it passes through, and it's this bending, or refracting, of light that holds the key to invisibility. Hold that thought.

If atoms hold the key to invisibility, it makes sense that we will need to manipulate them in new and innovative ways. And we first developed the ability to do this back in the early 1980s. Using the 1981 Nobel Prize-winning Scanning Tunneling Microscope, scientists are able to not only take pictures of but also manipulate individual atoms. In 1990, this technology caused waves and hit the international media when it was used to spell out "IBM" using 35 individual xenon atoms - a watershed moment for nanotechnology.

Using this technique, scientists are attempting to to construct materials and even machines using individual atoms as building blocks. And it's research in this field that seems most likely to pay off when it comes to invisibility.

Surely the most promising application of nanotechnology when it comes to invisibility is in the production of what scientists call metamaterials.

Thought to be prohibited by the laws of optics until less than a decade ago, metamaterials have properties that are not found anywhere in the natural world and have the potential to one day render objects completely invisible even to the human eye.

Metamaterials are made by rearranging the building blocks of a material in sophisticated arrays so that its overall index of refraction (the extent to which light is bent as it passes through) is negative rather than positive. By doing this, you can potentially bend light around an object and out the other side - a cornerstone in the quest for an invisibility cloak.

In 2006, scientists from the US and UK created a material from copper and other metals that was able to bend light around a cylinder in such a way as to render it almost completely invisible to microwave radiation. This stunning experiment proved the concept and sparked a new race to build metamaterials that can manipulate different kinds of light.

Nathan Myhrvold, former Chief Technology Officer at Microsoft, says metamaterials "will completely change the way we approach optics and nearly every aspect of electronics. [They] can perform feats that would have seemed miraculous a few decades ago."

So the laws of physics don't prohibit light from being bent around an object, but how do we create a material that could render an iPhone invisible?

The problems arise from the fact that the crystals inside the metamaterials must be smaller than the wavelength of the light you're attempting to bend. With a wavelength of around 3cm, creating a material to interact with microwaves it turns out is pretty straight forward. However, to play with visible light in the same way, you're talking many different wavelengths between 380 and 800nm, one nanometre being a billionth of a metre - about the length of five atoms side by side. Quite a challenge.

Current page: How to make an iPhone invisible: 1

Next Page How to make an iPhone invisible: 1.
See more Mobile phones news