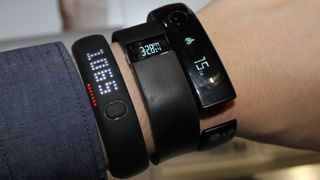 You don't have to be Theodore Twombly in the 2025-set film Her to understand that wearables and human-like AI represent some of the most forward-thinking technology.

Futurist and Google engineer Ray Kurzweil knows this and has recently hypothesized that an intelligent operating system like Samantha is likely to be invented by the end of the next decade.

The path to delivering that AI starts with the current crop of Internet of Things gadgets that can analyze the body and collect data regarding how we feel.

None of them can carry on full conversations with us via an ever-present earpiece, but that hasn't stop companies from pushing the first meaningful quantified self tech at CES 2014. Eventually, the machines may find their voice to talk back.

From head to toe, TechRadar set out to explore what this means for each part of the body and what's currently available from today's cutting-edge wearables manufacturers.

The most exploited body part for the wearable future is going to be the wrist. Bracelets, bands and watches are all becoming "smart" and have already latched onto millions of early adopters.

These quantified selfers are able to calculate calories burned, number of steps walked, flights of stairs climbed and distance traveled in a day. A few of these wrist-mounted wellness tools can also report on sleeping habits.

Equally as important as the data collected is the fact that it's automatically charted. Users aren't forced to analyze the statistics day-by-day. Trends and patterns begin to emerge seamlessly, reinforcing whether or not a new workout routine is effective.

The three most popular fitness-focused smartbands doing this are the Nike FuelBand SE, Fitbit Force and Jawbone Up. They're lightweight, rubber-coated bracelets or bands that embody all of the metrics that workout enthusiasts seem to want - except for a heart-rate monitor.

The Basis Health Tracker Watch fulfills that heart-rate desire and includes a few more advanced stats, but its extra sensors make it so big that it's a wearable in name only. Basis Science is reportedly looking to sell to the highest bidder, so its bold but too big technology could live on.

More smartbands are on the way. The LG Lifeband Touch adds a swipeable screen to its fitness tracker as well as incoming call notifications, blending the smartband and smartwatch category.

Garmin Vivofit features a non-backlit display that's always on and never needs a recharge. Razer Nabu has two screens, one for generic notification icons on top and a more discrete underarm spelling out private messages. Both are compelling for different reasons.

Wrists of the future may be home to technology that's smarter than smartbands, as watches do more than display the time these days. Incoming calls notifications, text messages, emails and social media notifications are beamed to the wrist.

The sophisticated-looking Pebble Steel was our favorite wearable of CES 2014, while the Sony Smartwatch 2 and Samsung Galaxy Gear brought similar functionality to Android device owners with average results.

There's progress to be made among smartwatches, and that may come from top players like Apple, Google and HTC.

Apple is rumored to be readying an iWatch with a digital metrics depository called Healthbook. The metrics are just as unconfirmed as the device itself, but it would have the advantage of full integration with the iPhone 5S, a problem Pebble has run into thanks to Apple's walled garden.

Google is said to be working on a smartwatch of its own, while HTC is promising to fashion a wearable, with hints of it being a smartwatch, before Christmas to go along with the HTC M8.

A computer-packed watch may seem like gadget overload, but if it makes taking out a phone to respond to a message passé, it could actually lead to less reliance our current tech addiction.

Bluetooth earbuds have existed ever since the Nokia HDW-1 was fit into someone's ear in 2002. After years of stagnation, the technology is about to move well beyond hands-free calls.

Having information piped through an ear canal could be how we navigate the world in the future, whether it's receiving audible turn-by-turn directions or playing a melancholy song. It can all be done without looking down at a screen. Commence making eye contact again.

The most promising example of this is the Intel Jarvis prototype, which actually resembles the earpiece worn by Her's protagonist. It's part of the chip maker's wearables roadmap that's designed to prove its ready for the Internet of Things after it embarrassingly missed mobile.

Jarvis is more than Intel's version of Siri through an earpiece. The company says its AI is located inside the device and doesn't need to slowly be fed its knowledge from the internet. In a very familiar motto, it has its intel inside.

The LG HRM Earphone Heart Rate Rate Monitor and the Kickstarter-funded The Dash wireless smart in-ear headphones are also pushing the earbuds boundaries. Both devices allow runners to play music, track fitness metrics and check their heart-rate without the inconvenience of wearing an HRM strap across their chest.

This technology has peaked the interest of Apple, with the Cupertino company filing a patent for in-ear fitness trackers that could easily be paired with an iWatch.

Current page: Wearables for the wrist and ears