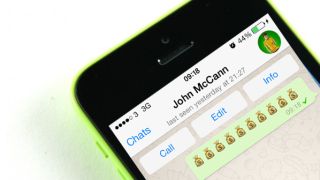 What's the emoji for 19 billion dollars? Whatever it is, the founders of WhatsApp are no doubt using it again and again: this week it went from being a Facebook rival to being part of Facebook. Facebook is technically $19 billion poorer (although the bulk of the deal is in Facebook stock), and in return it's getting a service with 450 million users and explosive growth.

What's going on? Matt Swider knows. It's all about the developing world, where WhatsApp is huge. "While the social network reaches 1.23 billion monthly active users, it's approached saturation in the developed world," Swider says. "Who do you know who doesn't have Facebook?"

Facebook is "transforming its mobile presence with standalone apps and company takeovers," Swider says, and that's fascinating: as Gary Marshall notes, while Facebook cannot possibly be the best, most popular service in every sector, "it can buy the best, most popular services in every sector… and if it's smart, it won't try to assimilate them, integrate them or otherwise mess them up as the previous generation of tech giants - *cough* Yahoo! *cough* - so loved to do."

That makes Facebook almost "unkillable", a strategy of "if you can't beat 'em, buy 'em" that means rivals "don't just have to invent a better product and attract millions of users. They also need to be unbuyable at any price."

If you're worried about WhatsApp's new owners, there are plenty of apps that'll happily sign you up. We've collated the very best iPhone messaging apps here, and the best Android ones here.

"Thanks for reminding us not to be creeps, Google!" she says, pointing out that "the fact that Google thinks you need 'don't be a creep' spelled out to you is patronising" - and of course, the people who actually are creeps won't be listening anyway.

It's nearly spring, and that means just one thing: new phones! Pick of the bunch is likely to be the Samsung Galaxy S5, whose imminent launch has created so many leaks we're thinking of buying some sandbags. The latest reports suggest an interesting new camera with a 16MP sensor, the ability to shoot 4K video and a fancy new flash.

Samsung may be hogging the headlines this week, but next week's Mobile World Congress in Barcelona will feature a keynote by Mark Zuckerberg and more new phones than you can shake a stick at. Do we have the details? You bet we have, and they're all here.

As with most trade shows, some firms are jumping the gun to announce products early. This year's culprit is LG, whose G2 Mini is now official. The name's a little misleading - the Mini has a 4.7-inch screen, which isn't exactly mini - and the specs are hardly spectacular, but it's nice enough and runs Android 4.4 KitKat.

Remember when Nike unveiled Back to the Future trainers back in 2011?

If like us you were disappointed that they didn't have the self-tightening tech you saw in the movie, we have great news: it's coming next year, or in about five minutes if you have a DeLorean. "Are we going to see Power Laces in 2015? To that, I say yes!" Nike's Tinker Hatfield says.

Sadly there's still no sign of a working hoverboard. Maybe Mark Zuckerberg could invest in that.