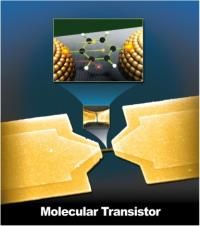 Hidden between these gold contacts is a single molecule, acting as a transistor

A group of scientists from Yale University has succeeded in creating the first transistor made from a single molecule.

The team showed that a benzene molecule attached to gold contacts could behave just like a silicon transistor.

By altering the voltage applied to it through the contacts, the researchers were able to control the current passing through the molecule.

"We were able to allow current to get through when it was low, and stopping the current when it was high," says Mark Reed, Professor of Engineering & Applied Science at Yale. In this way, the team was able to use the molecule in much the same way as regular transistors are used.

Being able to fabricate electrical contacts on such small scales, identifying the ideal molecules to use, and figuring out where to place them and how to connect them were key components of the discovery. "There were a lot of technological advances and understanding we built up over many years to make this happen," Reed said.

Scientists are interested in using molecules in computer circuits because traditional transistors are not feasible at such small scales. However, Reed stressed that this is strictly a scientific breakthrough and that practical applications, such as small, fast molecular computers remain many decades away.

"We're not about to create the next generation of integrated circuits," he said. "But after many years of work gearing up to this, we have fulfilled a decade-long quest and shown that molecules can act as transistors."