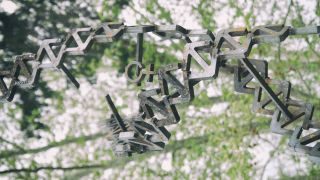 Chemists playing around with DNA have known for a while that acid causes the structure of DNA to fold up into what's called an 'i-motif', but now they've found that adding positively-charged copper ions can switch the structure a second time into a hair-pin shape. That change can be reversed using EDTA.

Two shapes that can be switched between allows DNA to act like the 1s and 0s that make computers, paving the way for silicon to be replaced by strands of DNA. The same process could also be used to make nanoscale machines and to detect the presence of toxic copper ions in water.

Zoë Waller, who led the discovery at the University of East Anglia, said: "Our research shows how the structure of our genetic material - DNA - can be changed and used in a way we didn't realise. A single switch was possible before - but we show for the first time how the structure can be switched twice."

She added: "This research expands how DNA could be used as a switching mechanism for a logic gate in DNA-based computing or in nanotechnology."

The details of the discovery were published in the journal Chemical Communications.

The key to self-assembling electronics could be... soap