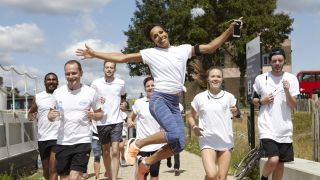 Hello all, it's another lovely week and yet again I've been off training with celebrities. This week it was the delightful Dame Kelly Holmes who offered me some great tips on breaking that dratted 10K time and how Runner G can start battling the demons all new runners get.

I also spent some time trying out Moov – sensors that strap to your body to help you run more efficiently, get fitter and swim better. I usually eschew anything without GPS but these little discs have been really cool so far.

I've once again relied on the lazy journalism of a Q+A with Kelly, but she was so articulate in her answers that I didn't want to leave anything out, as she was talking at an event to push the heartrate-in-the-ear Intel-powered SMS Audio Biosport headphones.

So if you're someone who has started running but keeps feeling like they're going to be sick / fall over / wet themselves with the effort, this should help put you ever-so-ever-so-slightly more at ease…

How can beginners feel less scared of heart rate training? Most people who start don't know how to use it properly…

It's actually used in a variety of ways. If you're somebody who's quite into their sport, using the heart rate will allow them to assess their fitness levels and gains.

Actually more importantly: their recovery. When some people go out on an easy run, they do it far too quickly, and that 'recovery' is not conducive to [improved] fitness. So they wonder why they're not progressing and it's because they're not recovering enough.

From the other end of the spectrum, people who are beginners, perhaps not as fit, need to monitor their heart rate as if it's SO high at the beginning they've got to be very careful.

But as they start getting their fitness levels up, they'll see the rate didn't go as high, that it'll be lower for longer.

And often when people run or train, they think they're tired, but actually if they monitored their heart rate they could push to the next level.

A common problem new runners face is the feeling that they can't go on, that they have to stop. How do you push yourself 'beyond your limits' at the end of hard races?

It's a big mindset to push yourself to a really high effort, to actually believe you're not going keel over and have a heart attack, that there's more in there.

It's almost like an attainment thing, having it in your mind that you want to move to the next level. The only way to do that is to stress your body.

Having a [heart rate monitor] to do that is quite useful, because you can work out your maximum heart rate, and if you've got a monitoring tool they give you the data to look at and realise: 'actually, I was alright!'

I write a 'Running Man of Tech' column and I've been trying for a year to break 40 min 10k, 40.02… it still haunts me. What kind of tips do you have for me to improve my training and get better?

Speed and endurance is absolutely key – think fartleks and intervals as that's the quickest way of getting your fitness up.

How would you structure them?

If I do fartlek and I want to be lazy I'll just use the lampposts [for distance intervals]. If I want to be more structured, I might do things like two minutes up, one minute recovery, then reduce that to have less recovery.

The effort has got to be at least 80%. Not just a few strides. Recovery short, effort full on.

Then you can do things like pick a distance, 400m or 800m, and do repetitions of those, with a shorter recovery.

One of my problems is I'll get to 7k in a race and start to blow, and the demons creep in even though I know I can finish it – I've just got to keep the speed going somehow…

A lot of performance is mental. If you want to break 40 minutes, you'll suddenly end up with 38 minutes because it's a mental barrier. Most people have an apprehension of the outcome of something, because they're almost scared of doing it.

So you've just got to think like this: split yours into 5km segments instead of 7k, saying: 'there's a 5k at that speed and my next 5k will be this speed'.

Or perhaps choose a speed for the first 5k and then a different one for each 1k after that - use that breakdown.

Moov is a company that's been around for about 18 months, originating as a crowdfunded idea, with the first version of the product emerging in July 2014. That's the one I've been trying out, but there's a newer, flashier, more fitness-y version coming soon (Moov Now).

The concept is simple: it's a sensor that can track you in 3D thanks to nine sensors on board, being able to tell speed, velocity, impact and more to build a complete picture. I decide the first thing to do is check out the gadget's ability to track runs.

'Imagine you're running on lava'

The thing with Moov is that I instantly feel like I need two of them to get the full effect. While I love the idea that I can run more efficiently through this thing's ability to monitor my striding, it feels unfair that you can buy one for $59 (around £40 - that's the new Moov Now, as the one I'm testing isn't available any more) then need to spend more to get the 'full experience' (although this is only for certain things like swimming or Cardio Boxing).

The straps to hold them in place are also weirdly low-rent, with the need to poke plastic through rubber not a slick experience.

For running you can only go with a single Moov, to check out how it feels. The downside for some is it needs your smartphone along for the ride, using the handset to provide robotic (yet strangely arous…hypnotic) voice commands and snatch some GPS data too.

I decided that I didn't need more speed or endurance training, and as I was doing a recovery run I would try and improve my form, so selected the efficiency setting. Instantly, the Moov was brilliant. Even in the warm up (although that's only two minutes, which is too short) it was giving me tips like 'imagine you're running on hot ground' or 'swing your arms to speed up'.

The idea was to get me running more on my front foot, to take more steps and to keep straight and upright. Within minutes I was running more loosely, differently to normal and feeling really energised too.

The app asks you to do three intervals of training, then suggests a new level to go to. I got up to level seven before returning to work – and that's with me wearing it on the wrist rather than the leg, as I'm apparently supposed to do.

On my next run I'll move it properly to the leg, and I'm hoping that fixes one MASSIVE annoyance. During the interval, the app will give you three updates on how many steps per minute you're taking, and whether this is above or below the expected level.

I'd constantly be 'crushing it' (robo-lady's words) on the update, but literally seconds before or after be told I needed to speed up as my average was too low. This confusion instantly broke my trust in the system – was I crushing it or laming out?

Next up was Cardio Boxing, and this definitely needs both Moov attachments on your wrists.

It's simple: you jab, cross, uppercut or hook, and like Guitar Hero you get little circles fired at you with varying speed that you're supposed to use to time your punch.

I used an iPad for this (as it's iOS only, the others are a mix of Android and Apple-friendly) which you'll need to do as larger screens are better.

It was awesome. The demo ran you through the stances and proper punching technique, and during the workout the app will tell you when you're not using the proper technique for pulling your jabs fast enough, punching hard enough or pulling your hands back to your chin quickly enough.

There are stats a-plenty to help you improve, and it really builds up a sweat. The only downside is that when it gets a bit faster, and the punch commands are coming at you at a fierce pace, you can just pretty much wave your hands at the right time and the app will register a successful punch.

Suddenly I wanted four sensors, two extra for my feet, so it could monitor my footwork and would know whether I was punching correctly – but then again, this is getting into body tracking territory, and perhaps things like Microsoft's Kinect are better.

But overall, my first two experiences with Moov were great, and I'm looking forward to trying them further (and getting my hands on Moov Now, with added sleep tracking and battery life enhancements).

I won't mention that I've cut my knuckles from trying out different punch stances in the bathroom mirror and getting a bit overexcited.