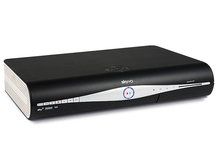 Cast your mind back for just a moment to that bleak, desolate time before PVRs. Shudder at the memory of being forced to set the timer manually with no Series Link at your disposal. Wince as you recall having to watch a programme when it was actually broadcast. Faint as you remember actually having to miss five minutes of EastEnders while you put the kettle on.

A recent survey carried out by NDS, the company responsible for the technology inside the Sky+ and Virgin+ PVRs, found that seven out of 10 people in the UK couldn't live without their PVR.

But the most enlightening finding was that PVRs actually help to maintain domestic harmony, with 62 per cent of UK participants saying that their humble hard-disk recorder has actually improved their relationship with their partner, while 64 per cent reckon it's improved family relationships. At this rate, Sky+ could put Relate out of business.

Freesat recording will be big

The role of the PVR is set to become even more important over the next few years as digital switchover hurtles towards completion in 2012 and as the amount of high-definition content increases.

The introduction of Freesat has also thrust PVRs directly into the spotlight, with Humax lifting the lid on the first Freesat+ recorder, which is out tomorrow and will be in the shops over the coming weeks. The eagerly anticipated FOXSATHDR box boasts twin Freesat tuners, so you can watch one channel while recording another, and allows you to record hi-def content from BBC HD and ITV HD.

Although the Freesat platform has been a big success since it launched in May with over 100,000 households signing up, the introduction of this Freesat PVR is likely to see those numbers go through the roof, as those people who think Freesat is no good unless you can record it, finally have a reason to buy into the platform.

It offers the same recording features as the Sky+HD box, but with a 320GB hard disk on board it can record twice as many programmes as its rival. And although the box's £300 asking price makes it more expensive than Sky+HD, there's no ongoing subscription to worry about.

Although it's not ready to disclose details about forthcoming products, Panasonic has recently confirmed that it's in discussion with Freesat about launching an HD recorder for the UK market.

Speculation about Panasonic's plans for a Freesat+ recorder went into overdrive after this year's IFA show, where the company launched a Blu-ray/HDD recorder for the French market. But in a bid to halt the inevitable spread of misleading information on the web about the launch of a similar product for the UK, Panasonic recently clarified its position on the matter, saying: "Panasonic is actively seeking opportunities to enter the HD recorder category in Europe as early as possible, since we have the most advanced technology for hi-def/Blu-ray recording products in the industry."

"The products that we can launch are dependent on the spec on the respective platforms. In the UK currently, the most clarified potential for development of such products is on the Freesat platform. While we can say we are in discussion with Freesat on the matter, and can say that we see good potential for recordable products on this platform, we are not yet at the stage where we can confirm actual merchandise or schedule."

We do know that the recorder made for use in the UK will be markedly different to the French model, because the DVB-T tuners will need to be swapped for satellite ones, and all the Freesat functions and software will also need to be incorporated.

Another company with designs on the Freesat+ recorder market is Metronic, the French company who recently inked a deal to launch Freesat products in the UK and intends to launch a recorder in early 2009.

As increasingly more companies enter the fray and unveil plans to launch their exciting new recording products, the future for Freesat starts to look brighter by the day.