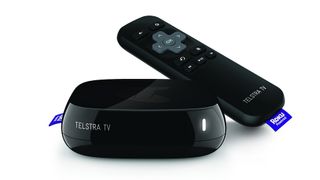 Part of the reason that subscription video-on-demand services have launched so strongly in Australia is that they're affordable enough to consider signing up for multiple subscriptions, especially when compared to incumbent pay TV operator Foxtel.

The catch is that there hasn't been a single TV-connected platform that supports all three services, although Telstra is looking to change that with its new Telstra TV device.

Telstra is partnering with Roku to bring a customised Roku 2 device to Australia that will stream Netflix, Stan and Presto straight to your television.

The new Telstra TV will be available in September and marks the first device that offers all the new streaming services, connected to both the internet via ethernet and directly to your TV through HDMI.

What are the perks?

Telstra already wavers downloads for anything watched on Presto and BigPond Movies through its broadband plans and though there hasn't been any word on the cost of the Telstra TV or exactly what is included, it looks like standard data charges will apply for the Netflix and Stan apps.

Alongside the major streaming services, the Telstra TV will also have apps for selected free to air catch-up services and the latest releases from BigPond Movies.

Telstra is also working with Roku to get international licensing arrangements for many of the apps currently available on the service in the US, which should give the device plenty of content to compete with the likes of the Apple TV.

Given the Roku 2 sells for US$69 (about $90), we expect the price tag to come in just under $100, making it an attractive option against the likes of Apple TV. With the right data incentives, it could also prove an attractive incentive for customers to switch to Telstra Broadband.