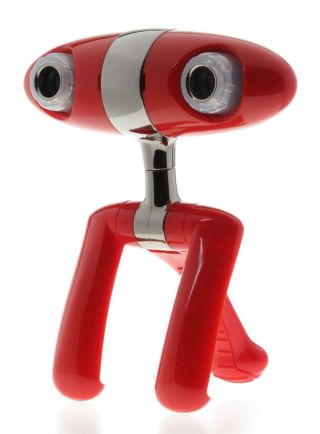 3D is all the rage at this year's CES. And it's one of the reasons why the Minoru 3D Webcam is getting a lot of attention.

The odd-looking Minoru camera (it reminds us of E.T.) features two separate lenses, spaced roughly the same distance apart as your eyes. These lenses record what the camera sees from two slightly different angles.

Software supplied with the Minoru camera processes the captured video feeds into a Red/Cyan 'anaglyph'. The resulting video has a stereoscopic 3D effect when viewed through a classic pair of Red/Cyan 3D glasses.

According to its makers, the Minoru 3D Webcam can be used with Windows Live Messenger, Skype, AOL instant messenger, OoVoo and other video-conferencing packages. Of course, the person at the other end will also need to have a set of 3D glasses.

For fun, the camera can also be used to take stereoscopic still pictures or to record 3D video for YouTube. Capable of 30fps video in resolutions up to 800x600 (SVGA), the Minoru 3D webcam also has a normal 2D mode.

But where's the fun in that? Shall we start taking bets on how long it takes for the camera to be used for, ahem, sexy stuff?