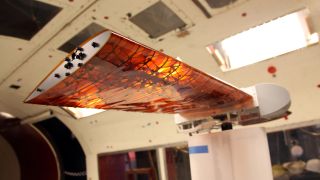 The wings of Flyer 1, the first powered aircraft in the world, were pretty different from the wings of aircraft today. They were flexible, rather than fixed, and wires and pulleys allowed the Wright brothers to adjust their shape dynamically - on the fly, if you'll excuse the pun.

Today's aircraft have wings that are rather less adjustable, featuring only a few flaps and ailerons to control the flow of air. But engineers at MIT and NASA have developed a new kind of robotic wing that can 'morph' into different shapes in flight.

“We make the whole wing the mechanism. It’s not something we put into the wing," explained Neil Gershenfeld, director of MIT’s Center for Bits and Atoms, who supervised the work by a group of researchers.

It works by embedding a system of tiny, lightweight subunits inside the wing, which are then covered by a 'skin' made up of overlapping covers. The whole structure and twist of the surface can then be changed at will with the activation of two small motors.

The resulting design is more fuel-efficient, but more agile to fly too. But the biggest potential advantage is that it dramatically simplifies the manufacturing process. Today's wings require large, specialised equipment, while these modular structures could be rapidly manufactured in huge quantities and then assembled by robots.

Similarly, repairs would be as simple as replacing a damaged subunit, and once the aircraft is no longer needed it could be broken up and the subunits repurposed for new wings.

So far, the design has mostly been tested in wind tunnels - but real-world tests on a flyable unpiloted aircraft have begun and are showing promise. Benjamin Jenett, who also worked on the research, said: “The first tests were done by a certified test pilot, and he found it so responsive that he decided to do some aerobatics.”

Eventually it's hoped that the concept could be used to mass-manufacture delivery drones and other similar applications. But there are wider applications too.

Gonzalo Rey, chief technology officer for Moog Inc., an aircraft motion-controls company, who was not directly involved in the project work, said: “The broader potential in this concept extends directly to skyscrapers, bridges, and space structures, providing not only improved performance and survivability but also a more sustainable approach by achieving the same strength while using, and reusing, substantially less raw material.”

The full details of the design were published in the journal Soft Robotics.