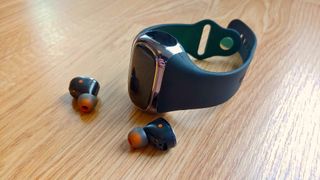 Get you a wearable that does both – why be content with a set of true wireless earbuds, or a wrist-based wearable, when you could get yourself a gadget that combines the two?

That’s the idea behind the Aipower Wearbuds, coming out of China as a product from a company under the umbrella of the Aukey brand.

Fully-funded on Kickstarter to the tune of $822,869, and available to pre-order now from IndieGoGo starting at an RRP of $149 / £123, our time with the Aipower Wearbuds revealed a product with a clever design in need of improved execution.

The Aipower Wearbuds essentially combine a fitness tracker with a set of true wireless earbuds. The wearable element of the gadget has a curved, ovoid display not unlike a Fitbit device, but housed in a bubble-like casing much thicker than your usual smartwatch or fitness tracker.

That’s because tucked away on either side of the display are two bullet-like true wireless earbuds. Rather than being housed in a charging case like some of the best true wireless earbuds, they instead pop out of the sides of the wearable, with the wearable itself acting as their charging station. The wearable, on the other hand, is charged by a proprietary magnetic power adapter that snaps on to the underside of the display.

When two become one

It’s a cool concept – like a honey trap for those (like me) who enjoy the space-saving convenience of a two-in-one gadget like those toasters that can also poach an egg – but the design highlights the first of a few problems the Aipower Wearbuds have.

It’s simply too big to comfortably wear. Tucking the earbuds of a safe size with reasonably-sized battery and drivers in them into the side of the wearable necessitates a chunky wrist element, and you’re going to struggle to ignore its weight, let alone tuck it in under a shirt.

The Aipower Wearbuds capabilities as a fitness tracker leave something to be desired at the moment too – though Aipower itself notes this element remains a work in progress, hence our reluctance to cast a final, scored verdict here.

The low-res 80x160 pixel screen is powered by an ARM Cortex M4, and it feels unresponsive to the touch. With an accompanying app, the band is set to be capable of tracking heart rate, steps, sleep and workouts, but the results proved difficult to trust – a few minutes walk around the TechRadar office recorded just 12 steps in total, for instance, and my gait isn’t that long.

The heart rate sensor wasn’t reliable either, with its green light flashing incessantly when triggered, yet failing to give a reading that wasn’t alarmingly inaccurate.

As for the band’s battery life, it should, under reasonable usage, last a whole seven days between charges. But we’ve found the screen’s lift-to-wake function can be triggered erratically, cutting that time down somewhat.

Things get a bit better however on the true wireless front. The buds are incredibly lightweight at a little over 3 grams each, with battery life stretching to 5.5 hours when fully charged. The aptX codec ensures a stable connection to your Bluetooth source of choice, too.

The buds manage to get comfortably loud too, and a snug fit deliver good passive noise cancellation.

However, the audio tuning is a bit overbearing – we normally bemoan the relative lack of bass response in true wireless earbuds, but the AiPower Wearbuds have the opposite problem. Low-end frequencies are too prominent, resulting in a soundscape drowned of any detail.

The touch-sensitive panel on each earbud, used to tap through track and volume controls, also proved unreliable in registering our inputs.

There’s still something attractive about the Aipower Wearbuds, despite the flaws, though at this point, given the sample we’ve seen, they’re impossible to recommend wholeheartedly.  But there's nothing done here better than using, say, a pair of Apple AirPods and a Huawei Band Pro 3 separately.

Here’s hoping backers have more luck than we did with our pre-production sample, and that any eventual Aipower Wearbuds 2 manages to refine what remains, in theory at least, a neat concept.