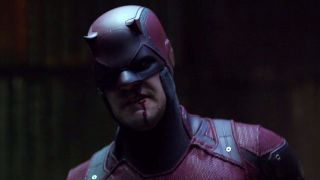 Daredevil, the vanguard for The Defenders

With the success of its Daredevil TV series Netflix has announced plans to put out a new Marvel show every six months, pulling inspiration from The Defenders group of heroes.

Speaking at the Television Critics Association Ted Sarandos, Netflix CCO, explained that it was the company's plan to continue producing a new shows from The Defenders pool of characters. The final end goal is for them to all finally assemble (wink) for an ensemble series featuring them all.

"Some will selectively have multiple seasons as they come out of the gate," said Sarandos. "So there will probably be two launches a year."

The Defenders suits this approach perfectly, the comic-book group is referred to as a 'non-team' because of the individualistic nature of its ever-changing protagonists. So building up the individual characters via their own shows or miniseries before throwing them all together makes perfect sense.

To hit its two per year goal shouldn't be hard as The Defenders has had a bunch of different members since Dr. Strange, the Hulk and Namor the Sub-Mariner set it up. There's a host of possible crossovers too, with the Guardians of the Galaxy having time-travelled their way onto the roster at one point and even Howard the Duck and Spiderman made their own appearances too.

Right now though Netflix has Jessica Jones, Luke Cage and Iron Fist in development to compliment the second season of Daredevil.

This huge commitment to creating its own Marvel series just shows how times have changed for the streaming giant. It also shows how big a player it has become in the TV market.

Following on from Sarandos' 2013 claims of a goal to "become HBO faster than HBO can become us" it is close to delivering on that promise. The Vulture has plotted the homegrown content of both companies showing that Netflix's 36 shows in in production or on-screen in 2015 outstrips HBO's 23 count of its own content.

HBO though is very much still HBO and with HBO Now it's created a US-only Netflix-a-like service too. And profit-wise there is no comparison - HBO is still reportedly ten times more profitable.

But then you've got to spend money to make money....

Who would you like to see Netflix creating their own series? I'm holding out it paying Cage to chew some more scenery as Ghost Rider.