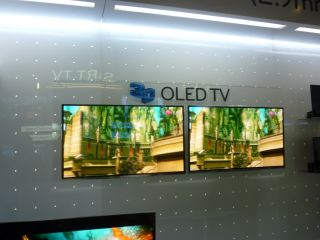 LG has announced that it plans to launch a 55-inch OLED TV in the second half of 2012.

Speaking at an event in Korea at which LG announced its financial results, LG Display CEO Kwon Young-soo explained to reporters that the company would be moving its focus from small and medium-sized OLED displays to the big hitting TVs.

"We will make no more investment in the sector judging that the OLED businss is relatively less profitable than other products in the mobile sector," he said, referring to the burgeoning tablet and smartphone display markets.

Instead, he said: "LGD[isplay] will launch a 55-inch OLED TV by the second half of next year."

The company will be aiming for quality not quantity, with initial shipments running in the tens of thousands rather than a full-scale roll out, with mass production dependent on consumers' reactions to the first runs.

TechRadar has some footage of the 55 inch LG OLED television in action, check out the next generation of televisions below:

LG Display also announced that TV display panels are currently bringing in around half of its overall sales; sales from the company as a whole run to around £3.5 billion, up 13 per cent for the quarter.