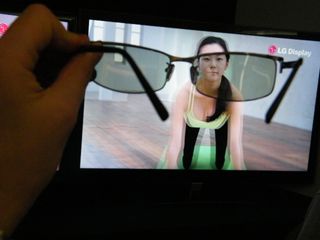 LG has made a startling backtrack today in its 3D odyssey, backing passive 3D technology as the future of 3D and castigating the use of active shutter glasses.

In the home of bets, Las Vegas, LG has made a massive gamble putting the majority of its chips onto passive 3D technology eventually being the dominant 3D tech in the home.

TechRadar was one of the select few publications that got access to LG's talk on 3D display technology at CES 2011 and was given a lecture on how active shutter 3D causes nausea and is essentially bad for consumers.

Currently LG's passive range in the UK is something of an afterthought for the Korean based electronics manufacturer.

Although Sky has endorsed LG's passive TV range by using the sets in select pubs up and down the country, the TVs have only been sold in few places for the general public.

This is all set to change.

LG was part of the crowd endorsing active shutter technology at last year's CES, but now it is positively being negative about the tech and prompting everyone to go passive.

LG noted to TechRadar that there are many benefits to passive 3D, including a brighter picture, glasses that can also be used as sunglasses and less crosstalk.

LG failed to mention, however, that active shutter technology offers true Full HD picture quality. This was glossed over in its press conference with mention that it used a select group of people to test the passive technology and they couldn't notice the quality difference.

When asked if LG would continue to use active shutter technology – in a room filled with material telling us we would essentially be sick if we put the active shutter glasses on – a spokesperson for the company wouldn't confirm that it has stopped manufacturing active shutter TVs.

TechRadar bets that when we visit LG's stand tomorrow, active shutter technology will still be used, albeit pushed in the corner like an unwanted Christmas present.

Although Sony and Samsung are yet to do their keynote speeches, it is almost a given that both companies will be endorsing active shutter technology for its 3D TVs.

All three manufacturers have done a decent job selling this technology to the masses over the Christmas period, offering up discounts before the VAT hike sinks in.

For LG to now tell consumers that this technology is essentially inferior to passive 3D will be hard to swallow for many, given that every sales person up and down the country has been telling customers differently.

In a quick hands-on with the new passive glasses, however, they do seem to be an easier bit of kit to sell.

Essentially they are glorified sunglasses that actually have UV protection – more Top Gun than Buddy Holly.

But consumers that do follow what LG is telling them will have inevitably to pay more for the TVs as the 3D technology is in the sets and not the glasses.

This will probably even itself out due to the glasses being cheap, but the likes of Sony and Samsung will be looking to drop the prices of their active shutter glasses in due corse.

At the LG press conference this morning – which is always the first keynote to kick off CES – the CTO of LG, Dr Skott Ahn, said: "3D is important to LG but the main thing is comfortable 3D.

"[We are offering] a 180 degrees viewing angle, brighter pictures and flicker free 3D."

What LG is actually 'offering' is another format war – one which most thought was over.

It is pitting passive 3D against active 3D, which is not only difficult for consumers to comprehend, but is a mixed message that even LG seems to be struggling to come to terms with.